Based in Windhoek, Air Namibia (IATA code SW) is the government-owned carrier of (surprise, surprise) Namibia. The airline is a full service carrier and has recently upgraded some of its fleet - so expect free food and drinks on flights, and perhaps a newish plane. The airline has numerous flights to Namibia from South Africa. You can catch an Air Namibia flight from Windhoek to Europe (Frankfurt), South Africa (Cape Town and Johannesburg), Angola (Luanda) and many destinations within Namibia.

11 February 2021: The airline has sadly entered liquidation, with them operating their final flights today. The board had left the airline last week due to increasing government interference. About 600 jobs will be lost as result. Affected passengers are to contact the airline or ask their travel agent for assistance in contacting the airline.

There are 17 Air Namibia flight routes, and the airline has a monopoly on 13 of them (the exceptions are WDH-JNB, WDH-CPT, WDH-LAD & LUN-HRE).

18 Feb 2014 : An agreement is concluded with Lufthansa, whereby passengers can book flights from the UK to Windhoek; with the UK to Frankfurt leg being flown by Lufthansa. Spots in the UK which can be flown from are London Heathrow, Manchester Birmingham, Edinburgh, Dublin and Aberdeen. This extends the codeshare from the previous arrangement where only destinations in mainland Europe were included.

31 July 2013 : Air Namibia enters into its one and only codeshare, with Kenya Airways, whereby:

“We are excited about this partnership. By facilitating convenient travel for our passengers, this code-share agreement will enable us to make a contribution towards spurring sustainable development in Africa,” said Mbuvi Ngunze, the COO of Kenya Airways. 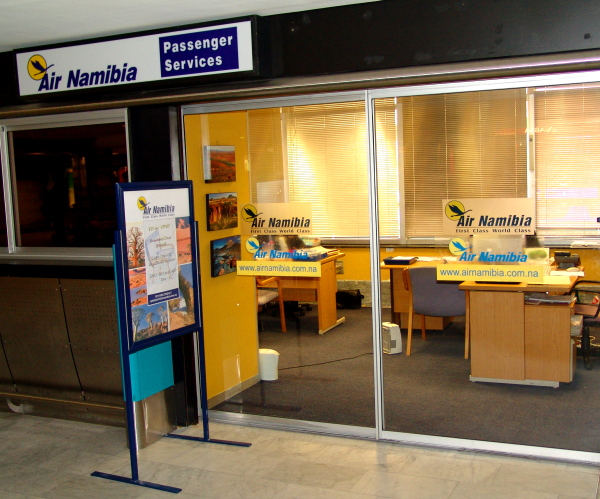 Phone 0860 109 716 or email reservations@airnamibia.za.com or book flights at Air Namibia.

In 1982 South West Africa/Namibia's government obtained a majority shareholding in Air Namibia (then Namib Air) and made it the national carrier in 1987.

Contact Air Namibia at employ@airnamibia.com.na, to find out about jobs.

Reward$ is Air Namibia's loyalty programme, whereby you earn miles by flying with the airline. The miles can be used to purchase flights, for upgrades to business class or premium economy class, or to pay for additional luggage. It's free to join, and miles are transferrable between Reward$ members.

There's an Air Namibia special where if you fly with the airline to Cape Town, you can get up to 30% off your accommodaton rate at certain Three Cities Hotels: The Bantry Bay Luxury Suites, Inn on the Square, Mandela Rhodes Place Hotel & Spa, The Peninsula All Suite Hotel, Kleine Zalze Lodges and Le Franschhoek Hotel & Spa. All you've got to do is present your boarding pass stub when you check in at the hotel.

In 2013 there was an Air Namibia special where the presenation of your boarding pass stub & ID would qualify you for 50% off at Protea Hotels in Namibia (Katima Mulilo, Luderitz, Ondangwa, Oshakati, Swakopmund, Walvis Bay or Windhoek) for a maximum of 3 nights.