Send us a review and photographs of your cruise from Cape Town & earn cruise vouchers.

Durban has the warm water, but imagine gazing upon Table Mountain from aboard a ship with a cocktail in the hand! :)

To get a cruise quotation from Cape Town please fill in the form below - the questions have been especially tailored so as to enable our cruise experts to find the best cruise special for you. Navigeer na Ritsgids se Kaapstad bootreise webblad om die Afrikaanse weergawe van die blad to sien (email cruises@southafrica.to if you're experiencing difficulties).

Cruise tip: Make 100% certain that you attend the sailaway party on your departure from Cape Town, as it offers the magnificent backdrop of Table Mountain.

Here's the view you can expect when cruising to Cape Town:

If your ship is in Table Bay at dawn, this is the view you can enjoy as you sail from Cape Town: 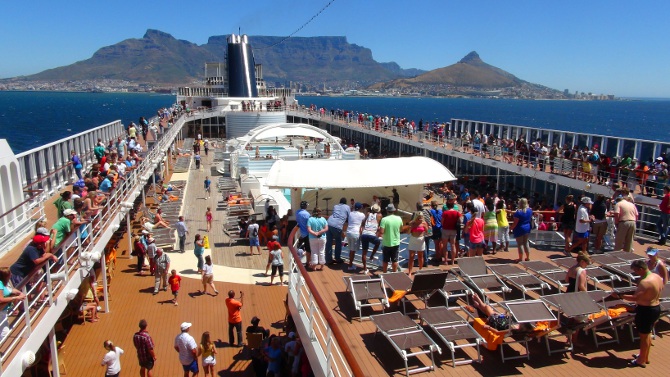 P&O Cruises offers cruises from Singapore to the Cape.

Key an eye out in the harbour for the tugs & pilot boats. Always interesting to watch them bend into the wind & the waves crash onto their decks, as their brave crew assist ships in and out of the harbour

Whereever in the world you may be, SouthAfrica.TO are at the ready to book a cruise from Cape Town for you.

A CT travel agent wrote to tell us : "My client told me that many passengers disembarked in Cape Town and went straight to the airport to fly out again – without spending any time here at all! There was a small group that was spending just the day here and flying out in the evening. This is very strange." So if you're on a flight to Cape Town for the cruise, do spend some time touring around the city, or else you're missing out on half the adventure - see our CT day trips page, if you're short of ideas.

Cruise ships generally dock at E-Berth in Duncan Dock (see map below). There is parking in the vicinity, although it gets pretty full on the day of a cruise, so you are advised to arrive early.

The Transnet National Ports Authority has budgeted R3billion to build a new passenger terminal in 2014, which is better located. On the 23rd September 2013 the Chief Executive of the Waterfront, David Green, said that they are preparing a bid for the new Cape Town cruise terminal to be at the Waterfront - they're submitting their bid in October 2013, after which Transnet Ports Authority were meant to spend 5 months deciding which bid to go with. The Waterfront believe they can increase their contribution to South Africa's GDP by 51% if they're allowed to develop a cruise terminal at the Waterfront.

On 1 July 2015 Transnet National Ports Authority announced that the V&A Waterfront was the preferred bidder for the Cape Town cruise terminal. The V&A Waterfront is responsible for operations, maintenance, and will transfer ownership back to the Transnet National Ports Authority in 2035. The cruise terminal is expected was completed around December 2017.

The Port of Cape Town is situated in Table Bay and is managed by the Transnet National Port Authority. The port manages the most fresh fruit in South Africa. It has an impressive backdrop of Table Mountain and the Cape Town city, and part of it forms the Cape Town Waterfront, a major tourist attraction. There are some impressive hotels in the harbour area, like the nearby Cape Grace (the closest hotel to E-Berth), and these are well worth a visit before or after your cruise. Because of the strong south-easterly win in summer months, the harbour is sometimes closed to ships entering and exiting - which poses obvious challenges to passenger liners. The port is also home to the Royal Cape Yacht Club.

The establishment of the harbour in Cape Town dates back to the 6th April 1652 Jan van Riebeeck & co arrived in Cape Town to set up a resupply station for ships travelling from Europe to the East. In 1882 the Robinson Dry Dock was completed, and is today the oldest functioning dry dock worldwide.

"Welcome to the bottom of this article :) We hope you found it informative, and now have enough information to book your cruise from Cape Town. If not, please drop an email to cruises@southafrica.to (in fact sends us a note anyway, we love to hear from our readers). Wishing you blue skies and calm seas. Ciao." Rob Baker, Chief Executive of South Africa Travel Online