Looking for an affordable flight to Cape Town? We've got you covered with cheap flights available through the comparison tool on the left.

You know you're on a flight to Cape Town, when you see a flat-topped mountain which looks as if its peak has been cut off. Cape Town, also referred to as the Mother City or Hipster Central, is one of South Africa's top tourist destinations and it is not hard to see why!

Find out more about flights to Cape Town below.

23 June 2016: From 1 August 2016, FlySafair will operate daily flights between Lanseria, Johannesburg and Cape Town International. This will inevitably push down prices on the busy route and is a clear move from FlySafair to target more business travellers.

1. Kirstenbosch Botantical Gardens opened the Bloomslang Aerial Walkway in mid-April 2014. There is no additional fee to go on it (just the usual entrance fee). It is situated just past the concert area, on top of the tree section. 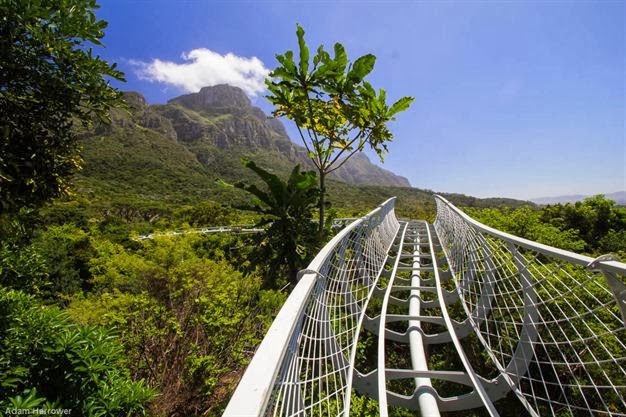 2. The Two Oceans Aquarium was named as one of the best aquariums in the world by Trip Advisor recently. They are officially the 10th best aquarium in the world as judged by reviews on TripAdvisor. The beautiful views of Table Mountain and the great food at the Waterfront surely helped the aquariums cause!

3. Trendy areas in the Mother City like Woodstock and Bree Street has welcomed a plethora of new eateries and young entrepreneurs to open stores. What would Cape Town be without their hipsters drinking their flat whites?

4. Talking about flat whites, Cape Town is famous for their beans! Being voted the best coffee shop in the world for the second time in a row, Truth Roastery in Buitenkant Street claimed top honours in the Telegraphs highly anticipated list.

5. Cape Town is absoluately unparalled in its natural beauty! From sundowners on Cliffton, to a hike up Table Mountain or a bike ride in the beautiful winelands - they have it all!

What is your favourite reason to visit Cape Town? Below we've created a bucket list that can be printed and ticked off as you do some of the things on the list. Even Cape Town locals might find this list useful!

Latest On time statistics at CPT

12 October 2015 : Mango Airlines will stop flying on the Port Elizabeth - Cape Town route from the 15th of October 2015. Clients who have booked tickets after the 15th on this route will be put on SA Express flights.

3 November 2014 : Qatar Airways started flying directly from Doha to Cape Town on the 3rd of November 2014. Flights are scheduled to be operated 5 times a week on Mondays, Tuesday, Wednesdays, Thursdays and Saturdays. One of their new Boeing 787 Dreamliner aircraft which has 22 business class seats and 232 economy class seats will be used on this route. Flights will depart from Cape Town at 12h45 flying for 10 and a half hours before arriving in Doha at 23h30. The return flight will arrive in Cape Town at 10h15 after departing Doha at 01h25.

19 August 2014 : We all know that Cape Town is the crown jewel of the South African tourism industry but more recently it seems like it is also fast becoming the crown jewel of the African tourism industry. Two African airlines have recently expressed interest in flying directly to and from Cape Town International. Botswana based charter airline BlueSky Airways is looking at flying between Gaborone and CPT from the end of the year with a Boeing 737 aircraft. This route will be the airlines inaugural route. At the recent unveiling of Kenya Airways’ new Dreamliner aircraft, COO Mbuvi Ngunze said that the airline is hoping to expand their operations into South Africa by adding the Nairobi to Cape Town route to their JNB – Nairobi route. No date has been put on the launch of this new route but they are seriously looking at flying to Cape Town according to Ngunze. All of this is great news for the tourism industry in Cape Town which will hopefully keep growing at a steady pace.

25 July 2014: Airports Company South Africa (ACSA) recently released the final Environmental Impact Assessment (EIA) report for the realignment of Cape Town International Airport's runway. Along with the release of the report they have opened up a 21 day public comment period for residents to raise any concerns that they may have regarding the final report. The major concern that has already been raised by residents of the nearby areas is the increase in high noise levels that will come with the flight path changes for departing and approaching aircraft. All interested parties are requested to make their comments available before the 1st of August 2014. Any comments or requests must be sent to SRK Consulting in writing at: Postnet Suite #206, Private Bag X18, Rondebosch, 7701.

17 July 2014 : Two hijacking incidents around Cape Town International have been reported to Authorities. These incidents involved an airport employee and a pilot over the last month. The pilot narrowly escaped being robbed and the airport employee was reportedly attacked and robbed along the N2 near the airport. ACSA stated that they are aware of the incidents and that they have put the required preventative measures in place. The Airports Authority of South Africa has asked travellers not to drive over any cardboard boxes or plastic bags on the road as these objects could be filled with cement or rocks which could cause serious damage to your car. If this happens you will then be forced to pull over which will put you at risk of a possible ambush alongside the road. Travellers are being asked to stay vigilant when travelling to and from the airport.

28 March 2014 : FlyCemair has been operating flights from CPT to Plettenberg Bay on Sundays & Fridays.

International travellers are often used to transitting via a train, so let's start off by saying that there are no trains operating from the airport.

There are a number of companies offering CPT shuttle services. We usually use EZ Shuttle, and have found them to be reasonably priced (although not always cheapest) and reliable.

MyCiti operate regular bust trips from the airport to the Civic Centre, and then onward to the V&A Waterfront via Thibault Square, the Stadium and Granger Bay. The MyCiTi bus station is just outside the main terminal of the airport, and you can buy a myconnect card there.

To get to the V&A Waterfront, take the N2 towards Cape Town, travelling in a westerly direction. After passing past the harbour, turn right at the first traffic lights into Walter Sisulu Avenue, and follow signposts to the Waterfront.

For international flights it's sometimes cheaper to fly to Johannesburg and then take a domestic low cost carrier from Johannesburg to Cape Town (or an intercity bus or train if you really want to save).

Finally, please read through our tips for booking cheap flights which contains a lot of more general techniques of keeping your airfares down (e.g. credit cards for bounty points, etc...)

Those flying to Cape Town are in for a treat of Cape Town culture. If you're an international visitor to South Africa you may not be aware of the subtle nuances of the relationship between proud Capetonians and the rest of the country - pictures speak louder than words!

Although there are no trains to Cape Town International Airport, the city has a fairly wide train network, include connections all the way up to Johannesburg.

23 October 2013 : "Since we got married, my husband of 32 years had never been on a plane. My brother was getting married in cape town and the entire family was going to fly down. On the day of departure he was quite nervous and excited. Some family members poked fun at him while others gave him sound advice, like "don’t worry when you in the air you can go for a walk outside, so relax nothing to worry about". "Dont use the loo as you might get flushed down", "Say your prayers just in case", and so on. On the tarmac seeing the plane so close for the first time he grabbed his camera and took loads of pictures of the plane. We proceeded to board and settled down in our seats. As the plane went to the runway my poor husband hit a sweat and held onto my hand as if he was holding on for dear life. Only when we were in the air I asked him to let go and relax. After being served a nice hot cup of tea and a snack he started enjoy ing himself. The next time he flew was almost 15 years later to Saudi and this time he was fine. Longer flight and more experienced. He he he" Fozia Ahmed

Routes in to Cape Town

Flights to CPT from within South Africa

International Flights to Cape Town from outside Africa

The Cape Town city centre is usually a hub of activity. 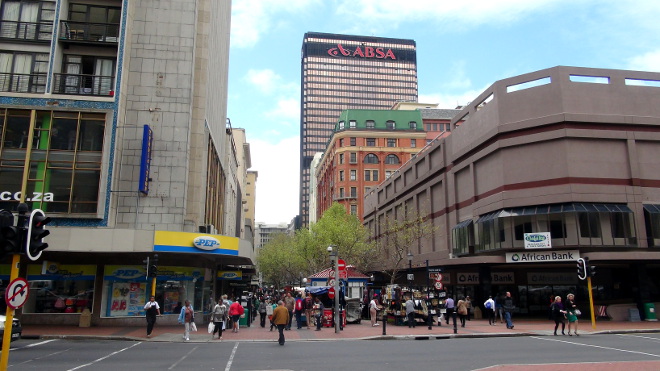 If you don't want to fly, why not make a bus trip booking to Cape Town (bus is usually cheaper but takes longer):

The Shosholoza Meyl offers economy and tourist class train trips from Johannesburg to Cape Town, and Port Elizabeth to Cape Town. For something more luxurious try the Premier Classe, and for ultimate luxury enjoy the Blue Train.

Want to know what the weather in Cape Town is like before you get there? Check out Cape Town Webcam. Generally speaking Cape Town has hot dry windy summers (December, January and February) and cold rainy winters (June, July and August).

When to visit Cape Town

Cape Town has a temperate climate, with warmer, dryer and windy summers; and wetter, colder and slightly less windy winters. The spring and autumn seasons have less wind, in between temperatures and a mix of rainy and sunny days.

To get a bit of everything, October is a great month to visit Cape Town - see the southern right whales, enjoy the Spring flowers, not so windy, not too cold, not too hot. There are also cheaper flights to Cape Town in October, as it's before tourists start flocking in, in large numbers.

Don't forget to climb Table Mountain - and take spectacular photos like this one taken by Justin Lee. 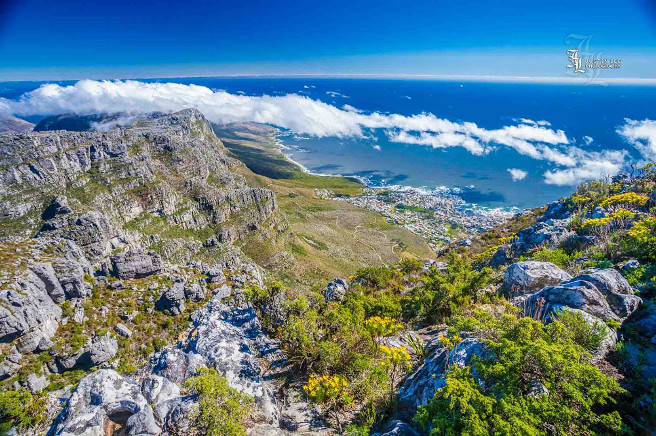 Whilst in the Cape, sample some of the Kaapsekos (local Cape cuisine):

Linda made a trip to Cape Town for her birthday. After flying in from Windhoek, she enjoyed "walking along the beach and sea front, eating French food (the first for nine months!), drinking good wine and enjoying several varieties of cheese (cheese is too expensive to be bought regularly in Namibia)...The boat ride over (to Robben Island) was so bumpy that several passengers threw up along the way and had to be laid down on the quay upon arrival for ten minutes to recover... Alex had booked a table at Baya restaurant, which overlooked the water and the lights of Cape Town.  The service was impeccable ("Excellent choice, Madam"), the wine wonderful and the food amazing."

Views as you Land

Your visit to Cape Town begins whilst still in the air - do not miss one of the best opportunities to take in the splendour of Cape Town. Here's some of what you might see. Flying in from Johannesburg, one sometimes passes over the Gydo Pass, in the photo you can see the R303 running between Citrusdal & Prince Alfred's Hamlet. 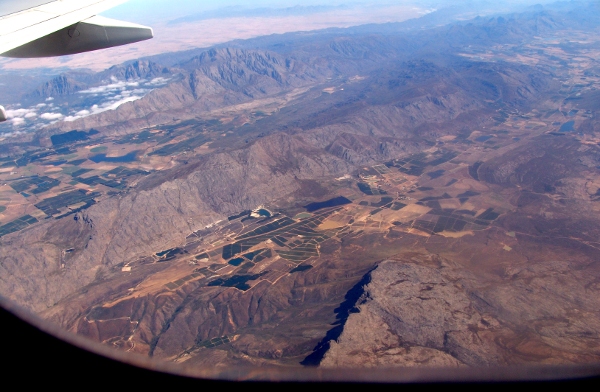 Robben Island played a pivotal role in the history of South Africa.

The Caltex Oil Refinery & its storage tanks, with the suburb of Bothasig to the left. 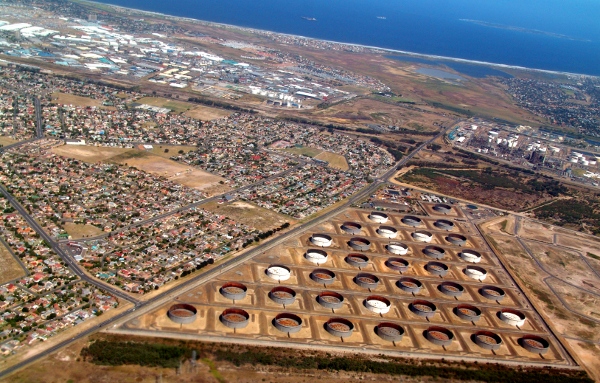 Before we sign out on this webpage, a little reminder that we'd be delighted to receive any writeups of CPT lights to publish, and in return we'll give you travel vouchers. Merely email cheapflights@southafrica.to (and remember to use the flight bookings tool on the top left of this page to identify cheap flights to Cape Town - we don't want any of our clients paying too much).