Cape Town is the capital city of the Western Cape province of South Africa. Cape Town's city centre is neatly nestled between Table Mountain and the harbour.

Here are the views of Lions Head and Signal Hill from the slopes of Table Mountain. In the background one can see Robben Island.

The view from the lower cable car station.

The V&A Waterfront is Cape Town's most visited tourist attraction. It's a working port, and there are many interesting ships stopping by. Here's a Chinese sailor guarding the CNS Luoyang which stopped in Cape Town on the 18th June 2014. 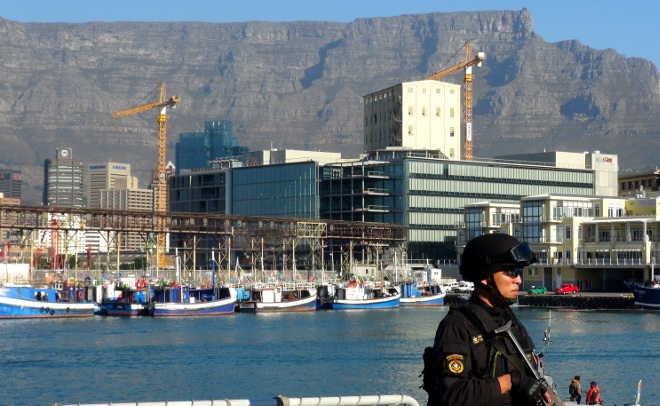 Portside, which was completed in early 2014, is Cape Town's tallest building (139m).

Here's a photo of Portside on the 4th October 2013, before it was completed.

Work started on Cape Town's grain elevator in 1921, and grain was first received on the 8th September 1924 - standing at 57m tall, the building was then South Africa's tallest building. The plan is to convert the grain elevator into a museum of modern African art.

The C.H. Pearne building at 25 Adderley Street, Cape Town, was built in 1903, and is now part of the Adderley Hotel. This Edwardian-style building was designed by architects MacGillivray & Grant, and has provisional protection under the National Heritage Resources Act. It's not really a leaning tower, that's an optical illusion created by the angle of the photo.

In between vibey Long Street and St George's Mall, Greenmarket Square is a central hub of activity with its crafts market, and its other 2 sides straddled by the aptly named LongMarket and Shortmarket Streets. Looking along Burg Street as it leads onto Greenmarket Square, on the right we can see the Old Town House.

Towering above Greenmarket Square since 1871 is the Methodist Church, with Inn on the Square and the Tudor Hotels flanking it in this photo. The square itself was created in 1696, making it Cape Town's second oldest public gathering spot, after the Grand Parade.

The noon-day gun is Cape Town's oldest living tradition. It can be viewed on Signal Hill, and listened to throughout the city. The stainless steel pieces are new additions to the guns. This gets fired by Telkom at 12h00 noon precisely, GMT+2. The proprietor loads the guns with a kilo of black powder every day, which costs R1400 per shot. It's been shot since every single day since 1806 (first at sunset, later at 13h00 and then finally they settled on noon). On the 4th August 1902 it was moved to the Lion Battery on Signal Hill. 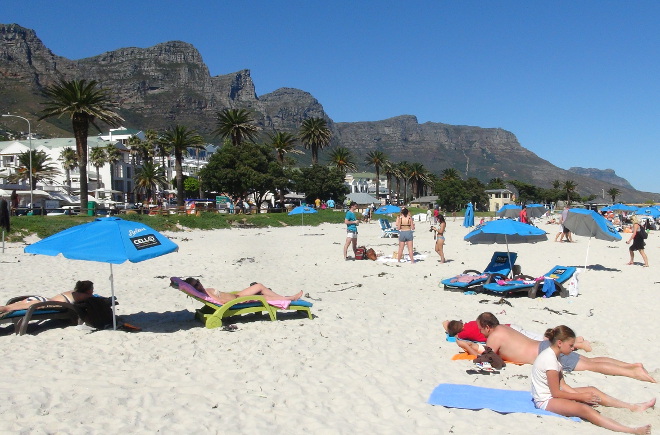 There are many restaurants in Cape Town, but don't stick with the conventional ones - sometimes if you go a bit off the beaten track you can enjoy a different experience - here's Millstone outdoor restaurant in Oude-Molen Eco Village, Pinelands.

Until the new concrete bridge was constructed in the late 1980s, this wooden bridge was the only crossing of the Diep River to get to Milnerton Beach and the lighthouse. There wasn't enough space for cars to pass each other, so cars used to wait at one side until those travelling in the opposite direction had gone their way. It was also a favourite amongst young boys to go fishing off the sides of the bridge. Today there is razor wire at each end and humans are not allowed on it. Nature abhors a vacuum, and where humans no longer go, seagulls have found a sanctuary.

Here's a photo of the Diep River as it flows gently past the Milnerton Lighthouse and the Milnerton Golf Course (that's the 18th hole in picture).

The Diep River runs from the Rietvlei in Tableview, under the R27 West Coast Road (from which this photo was taken) through alongside the Milnerton Golf Course and exits into the sea at Lagoon Beach.

The Liesbeek River flows from Table Mountain above Kirstenbosch Gardens through Rondebosch and Mowbray, before joining the Black River, and at Paarden Island it empties into Table Bay.

There are a number of waterways in Cape Town, in different states of cleanliness. Here's the confluence of the Black River and the Salt River (we recommend staying out of this water!).

For better or worse, Cape Town has experienced a massive expansion over the last 50 years. The Caltex Oil Refinery which we see in this photo has residential areas huggling it, but was built in a far less inhabited area in the 1970s. In the foreground of the photo is the Rietvlei Dam, and in the background the Durbanville Hills.

A short drive from the city and you're in the countryside. The Durbanville hills are filled with beautiful views, vineyards and quality restaurants like Bloemendal and Poplars. There are remnants of the original renosterveld at the top of the hills.

Cape Town has some fascinating buildings which connect to a past very few people around today were alive to witness. Capetonians don't need to hop on a flight to London to experience it (!) - here's a bit of the City of London in the Mother City - 18th Century Brushmakers (on Voortrekker Road in Maitland).

A taste of Zanzibar in Cape Town (Maitland). With its large Muslim community, Cape Town offers a perfect holiday for Middle-East tourists (see our Cape Town to Zanzibar flights page to get a taste of the real thing):

If your toddler is having a birthday party whilst you're holidaying in Cape Town, we recommend going to a Spur or Mike's Kitchen to celebrate, as most of them have a play area, and sing the most awesome renditions of Happy Birthday. Here's the staff at Mike's Kitchen in Milnerton, singing happy birthday:

If you enjoy shopping, Cape Town is jam-packed with shopping centres, the most famous of them being the one at the V&A Waterfront. Here's a photo of one of the smaller shopping centres - The Paddocks at Milnerton Ridge.

Birders shouldn't have too much trouble ticking the Cape Thick-knee (also known as the Spotted Dikkop or Spotted Thick-knee) off their list - they're really common in open fields, even amongst the residential areas in Cape Town. The one in this photo was spotted in Pinelands.

The World of Birds & Monkey Park is a popular zoo in Hout Bay, which is the largest bird park in Africa. Hold onto your goods when at the Monkey Park, as it's home to the cutest little kleptomaniacs.

The expression goes, it's "hard to be humble when you're from Hout Bay" - and one can understand why, when one sees its views - here's an unusual angle of "The Sentinel".

Cape Town has a rich tradition of street performers, but not many are more famous than Goodman, the blind Busker. You can usually find him strumming his tunes on the corner of St George's Mall & Shortmarket Street.

Some of the history of street artists in the city is recorded by Laurie Green in his book Taste of the South-Easter : "Long Street provided a great deal of free entertainment in those days, from barrel organs to German Bands...children of all colours danced to the four or 5 tunes of the barrel-organ" (no date given by Green, but it was probably the early 1900s). "Undisputed king of Cape Town's gutter musicians during my childhood, however, was a fat & middle-aged Malay known as Fluiter Yussuf...a favourite was 'Rosa', an old Cape love song with baffling lines & words that are not heard in Afrikaans nowadays. The whole street joined in when Yussuf reached the chorus: Sy seg sy sal my nooit verlaat, Sy volg my waar ek gaan, Rosa Rosa diet een hart, En sy volg my waar ek gaan".

In Cape Town most people aren't blessed with material wealth, and like this one of washing lines outside a derelict building in which the destitute are taking shelter and eking out an existence, are sadly all to common. The photo was taken at the end of Oude Molen Eco Village.

There are some parts of Cape Town with a reputation for being dangerous, e.g. Bonteheuwel, Khayelitsha, Manenberg, Nyanga and the Cape Flats in general.

During the day the city centre is home to many businesses and at night its jazz bars, nightspots and late-night coffee shops keep the city buzzing until dawn. The late night spots are particularly prevalent in Long Street, which also has quite a few old buildings (old by South Africa's standards).

The famous Victoria & Alfred Waterfront area on the harbour is home to a plethora of shops, restaurants and theatres. Here's the view from the harbour from aboard the MSC Sinfonia cruise ship. A cruise from Cape Town is one of the highlights of visiting the city. 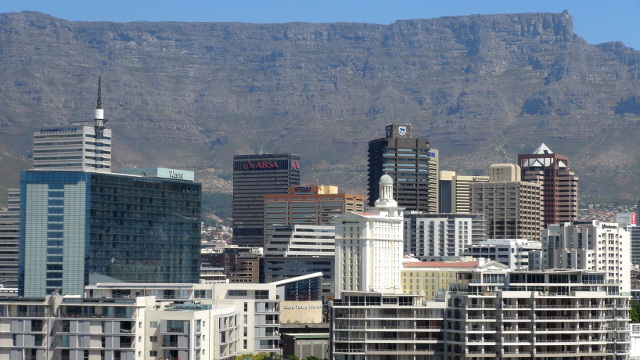 A good way of getting in a lot of the city fast is by taking a City Sightseeing Bus Tour. Here's the tour bus with the Twelve Apostels in the background.

I had it all planned out- it was Valentine’s Day weekend and since we were both Valentine’s babies, we celebrated our birthdays as well! We both love good food and wine so the weekend itinerary was based around eateries, restaurants and meals that we absolutely adore. Here’s what our weekend looked like:

This little holiday definitely left a lasting impression and even though I’m back in Cape Town now and thoroughly enjoying the ocean air, that weekend remains one of the best I’ve ever had.