Compare airfares of flights to George using the tool on the left which will contrast the prices of all airlines:

George Airport (GRJ) is still on the rise - there were 5.72% more passengers on flights to GRJ in December 2014 than in December 2013. The new Mango, FlySafair and SA Express flights have really stimulated the market.

There are direct flights from Cape Town, Durban and Johannesburg (only from O.R. Tambo International Airport, not Lanseria) to George.

George is not only is worthy of a visit itself, but is the gateway to garden route towns of Sedgefield, Great Brak, Little Brak, Mossel Bay, Knysna & Wilderness, the Karoo town of Oudtshoorn and one of the country's finest golf courses - Fancourt.

GRJ & Plettenberg Bay (FlyCemair flights) are the only airports serving the Garden Route. 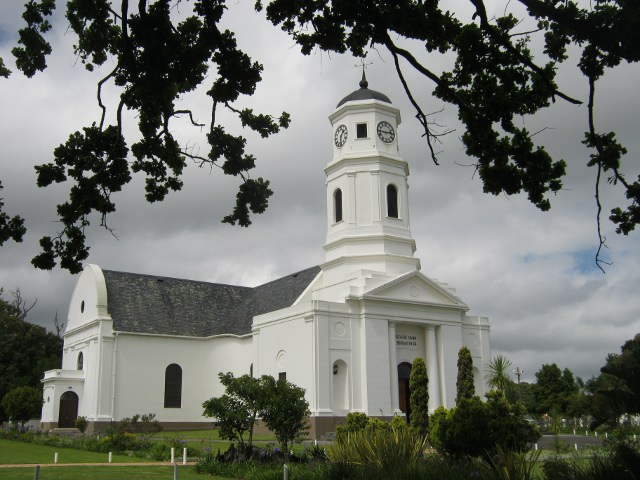 Here's a list of your options for accommodation in George.

George Airport (IATA code GRJ, ICAO code FAGG) was previously known as PW Botha Airport during apartheid in South Africa. Coordinates are (-34.005553; 22.378889). Like most of the major airports in South Africa, George airport is managed by the Airports Company of South Africa (ACSA).

It's a small town, and you can get to most spots within 20 minutes drive - e.g. from the airport to the Protea Hotel King George take 13 minutes to cover the 10km.

George Airport is situated some 9km to the South-West of George along the R102, and also 9km but to the north of Herolds Bay along the R404.

Interestingly, the airport was designed to be exactly the same as Namibia's Keetmanshoop Airport, when it was constructed in 1977.

Having experienced the loss of my laptop myself as a result of organised crime at an Airport, I was not happy to read that there are similar security problems at George Airport.

In my case after landing at Durban International Airport, I drove a vehicle from Avis car rental to a Southern Sun Garden Court hotel on Durban's beachfront. Whilst checking in at the hotel, a bunch of gangsters broke into my vehicle and stole my laptop. I suspect the criminals tailed me from the airport. Even though I provided them the licence number of the getaway car, police didn't manage to catch the criminals!

George, the most unlikely place to go on holiday but there I was. My first impressions of the town was, sleepy. We arrived early that day, since our booking in time was only at 2:30pm,which gave us a chance to explore the tiny market along side the road. I must say the locals are very friendly and persuasive, I ended up buying a hat and some locally made jewellery. We made our way to the lovely B&B situated off the main road. Coming into our rooms, it was cozy and beautifully decorated. First thing I did was get into bed and soon I was fast asleep. I awoke a few hours later to the sweet sounds of birds chirping in a tree, situated next to my room. Realising we didn't have anything to eat, we made our way to a local restaurant further into town. The food was impeccable and so was the service. Feeling satisfied afterwards, we went back to the B&B for a late night swim in the pool situated in a lush serene garden. The next day we were awoken by the lovely smell of freshly made breakfast, we got done and hurried downstairs to have some. Buffet styled, and so many yummy choices to choose from, I settled on an English breakfast. Feeling energised and ready to go, our intention was to go and explore the sleepy town. Needless to say I ended up shopping up a storm and leaving the stores with a little less money (than I intended on spending) in my purse. The rest of the day was spent walking around and enjoying our busy but serene surroundings. What's awesome about George is the fact that it's in the Garden Route and en route to places like Plettenberg Bay,Knysna and Sedgefield. The best beach that I've ever gone to thus far and my absolute favourite has to be Sedgefield. The weather is perfect, it's about an hour and a half drive from George, the waters are clear, there's a little cove for privacy it's just so beautiful. We literally spent the whole day there, just soaking up the sun and enjoying it's beauty and perfection. It was my favourite holiday not just because of the locals or the history of the places I went to, but the simple exploration of them. Caileen

Traveling is not just about your destination, but the journey, as all these infinite details can either ensure that your travel experience is something you will cherish for the rest of your life, or whether it will soon be forgotten in oblivion…

Traveling to the Garden Route by car or bus might be a long and tiring journey, but the gems that you experience along the way is unforgettable. Traveling on the N12 through Carolina, for example can get you a glimpse of Black Rhinos and other wildlife whereas Kimberley can ensure a full two days of interesting museum trips, filled with details of what made this country great in our quest for freedom from the British yoke. Take the Magersfontein museum located outside of Kimberly on the Battle Route. This small museum is something to experience as one gets to relive the battle that turned the tide for the Boers during the Anglo Boer War.
As one travels further through the oft dry Karoo, the scenery, especially after the first rains, when the dry veld is carpeted in yellow, purple and orange, sometimes as far as the eye can see, is breathtaking.

Experience the warm and friendly hospitality of the Karoo town folk as you travel through Colesberg, Beaufort-West and Oudtshoorn. The renowned Meiringspoort is an experience, especially when the sun is just starting to light up the pass while its warm rays kiss the huge rock cliffs that towers above you. Take a short climb to the little waterfall and it’s crystal clear water cascading down. And if you’re in luck, you may catch a glimpse of an eagle gliding in the air. Stop off at the renowned Cango Caves, the Valley of the Ancients, or visit Buffelsdrift where one can join their three baby elephants for a walk in the early morning or late afternoon. Not to mention the ostrichrides or my personal favourite, the Art, Cheese, Chocolate & Liquer Route in the heart of Oudtshoorn, which is bound to delight!

Climbing the Outeniqua Pass, that seems to take you up into heaven on your journey to the hub of the Garden Route, the view becomes breathtaking. Mountains covered in green, with the undulating motion of the Indian Ocean luring you ever closer to discover its beauty. George, located at the foot of the Outeniqua Mountain-range is a tourist haven in itself as there is so much to do, e.g. museums, the Old Slave Tree, the Timber Route, the Montague Pass, which leads to Herold on the Karoo side of the mountain. Hike the Groeneweide-, Outeniqua- or Tierkloofpass hiking trails, or do the Outeniqua Country Hop, which includes the Silverlily Dutch Cheese Farm as well as the well-known Redberry Strawberry Farm, host of the annual Strawberry Festival in George. Quaint restaurants like the Conservatory, Old Town House and others make for a different experience in cuisine if you don’t fancy the usual Take-Away and family eateries. Accommodation is abundant and there is something that will suite everyone’s budget. George also offers various sports – golf, flying, gliding, horse-riding to name but a few. Situated close to beaches like Herold’s Bay, Victoria Bay (renowned for its surfing waves) and Wilderness and other renowned towns worthy of sight-seeing like Knysna, Plettenberg Bay, there is more than enough activities to ensure a fun-filled and exciting holiday for everyone.