Is KwaZulu-Natal in Decline or Booming?

KZN offers a strong curry mix of funsunzi, mountains, bush, battlefield & city buzz - If you're a beach-bum you'll be in heaven, and if you're a hillbilly head for the Kamberg. With its balmy climate, golden beaches & warm surf; there's 600km of beachland opportunity. Travellers can choose from cultural Zulu experiences at iSithumba Village to wildlife viewing at the iSimangaliso Wetland Park (St Lucia, South Africa's first world heritage site). Dukuduku and Kosi Bay are amongst the province's protected coastal forests.

In this special report on KwaZulu-Natal tourism, we show how tourist numbers to the province have fallen over the period from 2010 to 2015: driven by a reduction in the number of road trips South Africans are making to the province. This is surprising, given the smorgasbord of tourist opportunities the province hosts.

Whilst overall tourist mumbers continued falling into 2015; this wasn't the case with airline passengers at Durban's King Shaka International Airport where a strong recovery has been seen in 2015 and 2016:

It's miniscule in comparison to the total numbers, but the well heeled passengers on these flights decreased from 991 in Dec 2011 to 918 in Dec 2016.

Scheduled domestic flights is no longer the sick man of Durban tourism. Domestic passenger numbers at DUR have now recovered to the level experienced in December 2011.

Photo credit : Joan Laine. Jabula Beach - is it the only one in the world where you can swim with hippos, crocs & sharks? Note that an additional risk is the tides and the surf.

Overland tourism is the culprit

There is an extensive network of quality roads in Kwazulu-Natal (mostly toll roads, so take enough cash), including the N2 and N3 national roads. Given almost all tourists travel to KZN via roads or flights (there is a negligible number who come by boat); the drop in tourists numbers in 2015 can be clearly attributed to fewer tourists arriving by road.

If we dig a little deeper into the numbers, we can see that the number of foreign tourists from Africa has decreased only slightly, from 393 017 in 2010 to 371 218 in 2015. The blame for declining tourist numbers in KZN can be attributed directly to the decrease in roadtrips South Africans are making to KZN.

Ups and downs of the Cruise Industry

From a cruise perspective Durban faced face serious headwinds at the end of 2014/2015, when MSC Cruises decided to send only one ship (the MSC Sinfonia) to South Africa, as compared to the 2 during the previous season (the MSC Sinfonia & MSC Opera). This resulted in a fall of some 50,000 cruise passengers (although some of the drop was for Cape Town cruises). The Sinfonia went to the dry dock in the off season with some 200 cabins added (400 to 800 more passengers per cruise), and during 2015/2016 had this additional capacity.

This is great, as cruises from Durban are the most attractive in South Africa - there's little chance of their cruises being delayed as a result of wind, like in Cape town, and they offer the island destinations of Mauritius, Reunion, Madagascar, Portuguese Island and Inhambane. And then the water's warmer - pools on ships are filled up from the sea, which is why the deck on cruises from Cape Town resembles Clifton Beach, with lots of pretty people soaking up the sun, but only the kids and the brave taking a dip. And then there's the fact that the boarding terminal at Durban harbour is far more attractive than its counterpart in Cape Town.

In the 2018/2019 season MSC is sending the MSC Musica to South Africa, which is even bigger than the Sinfonia. 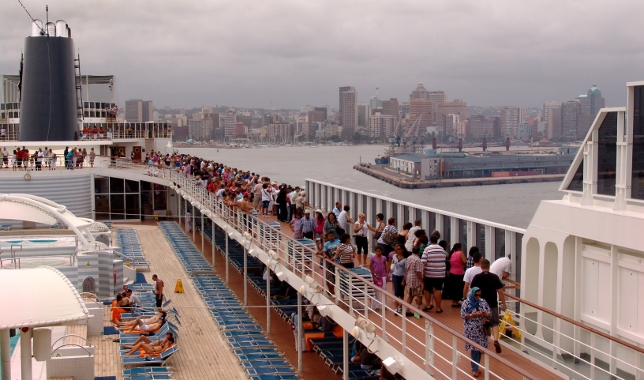 I asked several popular members of the South African travel trade and Durbanites, whether they thought that Durban was in decline:

We have also had some unsolicited feedback:

Kwazulu-Natal has a subtropical coastline (hot and humid) with most rain falling in the summer. The area between the coastal belt and the southern Drakensburg Escarpment is known as the Midlands. The Midlands is drier than the coastline and extremely cold in winter (snow falls on the high-lying grounds). In the northern part of the province, the subtropical patch wraps around the Kingdom of Swaziland to the beginning of the Escarpment.

More than ten million people live in Kwazulu-Natal on 92 100km² of land. The mother-tongue of the majority is isiZulu (the mother-tongue of the majority of the rest is English & Afrikaans). The culture of the province reflects a fascinating blend of Zulu, Indian, Afrikaans & British colonial traditions. Reflecting its history as homeland of the Zulus, Kwazulu-Natal's constitution specifically provides for a monarchy.

Kwazulu-Natal is the second highest contributor (of the provinces) to South Africa's GDP (Gauteng is the biggest). A key strength is trade and logistics. Helped by the abundant water supply, Kwazulu-Natal is being rapidly industrialised. Industries are found in Durban, Dundee, Hammarsdale, Ladysmith, Mandeni, Pietermaritzburg, Richards Bay & Richmond. The mining of several heavy minerals takes place at Richards Bay, and the export thereof at Richards Bay harbour. The Durban port is one of the 10 biggest in the world, and the busiest in the country. However, KZN's ports are facing increasing competition from Maputo, whose port is being developed by Grindrod, and is closer to Mpumalanga and more and more goods are being exported via it.

Agriculture forms a large part of this subtropical province's economy. Although there are several universities & technicons in the province, almost 23% of adults in Kwazulu-Natal have received no schooling (the workforce is relatively poorly skilled). The tourism industry is supported by the numerous hotels & restaurants. Unemployment in the province runs at about 25%. Less than half the potential labour force is employed in the formal sector of the economy, resulting in a high level of migration to Gauteng.

Kwazulu-Natal has a subtropical coastline (stretching from Port Edward in the south to Mozambique) and the towering Drakensberg mountain range in the west. The Drakensberg runs 200km along the western boundary of Kwazulu-Natal, and seperates it from the mountain Kingdom of Lesotho (look here for accommodation in the Drakensberg).

In ending off, let's look at some of the fun things to do in KwaZulu-Natal. These are amongst the reasons that we think that KZN rocks:

Here's a photo of Zinkwazi Beach: