Clarens - quaint memories as a tourist

A couple of years ago I had the immense pleasure of enjoying a three week road trip across South Africa, and I was lucky enough to stop over in Clarens for 3 nights. This stopover came highly recommended by a well travelled friend, and we simply had to see what the fuss was all about.

This little town reminded me so much of a Swiss village, with the surrounding Rooiberge mountains and Swiss-style buildings, that I had to pinch myself and have a homemade ale from the Clarens Brewery to remind myself that I was in fact, in the Free State! This town is an artist's haven, with a rich history & legend. Use it as your base from which to explore the Golden Gate National Park, Maluti Mountains & the Kingdom of Lesotho.

Time your visit for the Ficksburg Cherry Festival

Clarens is known as the Jewel of the Eastern Free State and is in close proximity to Ficksburg, the Cherry Capital of South Africa. There is even a festival celebrating the sheer, pink blossoms and the delicious little berries. I bought a fantastic bottle of highly alcoholic cherries and some cherry jam from one of the several little shops in Clarens. All I can say is, wow. If you're into your speciality chutneys and cheeses, you are in for a special treat. We bought several different cheeses, chutneys, spreads and artisan breads and had a feast! Their meat is also really good, nothing beats a lamb tjoppie on the braai.

You will need at least one full day to have a proper look around all the interesting antique shops and art galleries, they are brimming with wonderful finds for you to take home. I adored the Swiss looking, wooden buildings with their decorative woodwork, I can only imagine what it must look like in the winter, when it's snowing. Another thing to look out for, is the Clarens Sandstone. Many of the buildings are built from this beautiful, glowingly yellow stone.

When you peer into the distance, you will see the majestic Maluti mountains not too far away, which means you are very close to the Golden Gate National Park. You can stay in the park or enjoy a drive through, and will soon reach the Drakensberg mountains. You can walk all the way up to the Amphitheatre and past the proud Sentinal, watching over the ages. Here you will have an incredible view of Lesotho and the whole world, that's what it felt like to me! We even encountered a bit of snow. It was in a little shady nook, and hadn't melted yet in the fierce sun.

We had an hilarious encounter on our way back from our hike up the mountains when we realised we were about to run out of petrol! Since we didn't have any cash with us, we had to barter. We only had beer and fruit in the car, oh dear. As we went driving through Phuthaditjhaba, we asked everyone alongside the road whether they'd like to buy our beer. "Would you like to buy this beer?" ..."Yes"..."Do you have money?"....."No." As you can imagine, this took a while, but in the end we found an old man on the way to the doctor. We gave him a lift, he paid us and we still had our beer. It worked out well in the end! We passed an interesting rock overhang, completely covered in graffiti. It had a surprising effect, it looked as if a terribly foul mouthed rainbow got stuck inside the stone.

We stayed on a guest farm a couple of kilometers outside of Clarens, a massive sandstone farm house all to ourselves. It was so huge, we got lost a few times and you could easily invite over 20 friends for a comfortable sleep over, one bed per person. The silence of the pitch black nights was just amazing, soothing to the soul and the mind. Believe me, you haven't seen stars this bright. With so much space, you will hate the idea of returning to the city - we changed our plans and stayed an extra night.

Kiara Lodge has the enviable setting at the foothills of the Maluti Mountains, an extension of the Drakensburg mountain range, only a short drive to the Golden Gate National Park, Clarens and the Kingdom of Lesotho.

The lodges have been renovated offering a home from home experience. The kitchen although compact was well stocked and overflowing with solid granite work surfaces which ran along an entire wall lined with bar stools - providing a place to eat when experiencing chilly weather. The bathroom was large and modern with a corner bath and a shower. The rest of the unit was tastefully decorated and comfortable - with an open fire for those chilly winter nights. The patio area was large with a built in braai and outside sitting area. Check in was efficient and friendly. Activities for the children were varied, from putt-putt, indoor and outdoor pool, climbing frames, trampolines, tennis courts and a spa. The most fun my children had was sitting in a cardboard box and launching down the small slopes separating the lodges. A holiday club is on hand for the children where apart from the standard care on offer there is horse-riding and mountain biking. With a good restaurant on-site offering reasonably priced food on the menu, making it a no brainer when the last thing you feel like doing is cooking every night when on holiday. In fact everything has been considered to encourage the visitor to stay put, relax and never leave the lodge.

Yet a short drive delivers you into the stunning Golden Gate National Park with its beautiful walks, a vulture hide, dam and numerous cave paintings. In the opposite direction there is the artistic town of Clarens, referred to as the Jewel of the Freestate with its numerous art galleries, coffee shops and restaurants set around a grassy square.

Our most memorable find in Clarens was the Dinosaur Walk tour (tel 083 469 4703 David Groenewald). The talk was riveting and the walk historic, pun intended. Normally the few hours spent learning about dinosaurs that roamed this area, at the Clarens Dinosaur centre, is spent with David Groenewald. However on our visit our host was his father Dr Gideon Groenewald, who discovered Massospondylus footprints in 2007, accompanied by his wife, Susan. They managed to bring dinosaurs alive for each of us in our group, not a mean feat considering our wide age range audience from age 9 to 47 years old. When the giant southern super-continent Gondwana was still intact, this area of land, where Clarens stands today, should have been a desert area. However the geology of this area, over 200 million years ago was referred to as an anomaly. During this time period it looked nothing like the desert it should have been. Dr Gideon Groenewald was handed the task to solve this mystery. After eleven years of study he came up with the theory which was presented to us and what is being written down in the geology books of today. This area was swamp land caused by an extremely high mountain feeding water into a basin teeming with plant and animal life. Fossilised skull after skull was produced for our inspection. We held dinosaur, and ancient lizard, fossilised parts in our hands and were particularly excited when a fossilised dinosaur egg was held up for inspection. After the talk we set off in our cars - destination dinosaur footprints. The excursion was 15 km outside Clarens. This part of the tour was presented by Susan Groenewald and she approached it in a logical, step by step manner, building the evidence for what we were about to see fossilised in the sandstone. Recently formed buck prints set into the sandy bank of the river were investigated. Then an area of recently dried and cracked mud was highlighted. Additionally the pattern of ripples formed in the sand, just below the surface of water, was pointed out. A few metres further along after this we reached the area of sandstone exposing 225 million year old dinosaur prints, where we had the opportunity to observe fossilised cracked mud, fossilised ripples and over twenty clear dinosaur prints. It was even possible to make out where a dinosaur slipped and recovered and where another walked.

Our informative guides made an extra stop at the Lesotho Highlands Water Project, for our benefit. An impressive 40 km long tunnel was dug and fitted with a pipe to transfer water from Lesotho to the densely populated Gauteng area. A sample of the gigantic pipe was left on display which the children couldn't help but climb inside.

It's not surprising that Clarens is a popular getaway for weddings. For example, see this photographic series by Jacki Bruniquel of a beautifully photographed farmyard wedding in Clarens. You may recognise the groom, as being Springbok rugby player Jannie du Plessis. The wedding took place at St Fort.

Love this footage of paragliding near Clarens.

If you feel like driving all the way from Johannesburg, rent a car, or take your own, and follow the directions below for about 4 hours:

Directions from Johannesburg to Clarens

If you live quite far away, you can fly to Bloemfontein, hire a car from the airport for a few days and drive the 3 hours or so to Clarens. It is a truly beautiful drive, I'm certain you will find it just as relaxing as your actual stay in Clarens.

If you're up for adventure, action and cold water; try white water rafting on the Ash River, near Clarens. 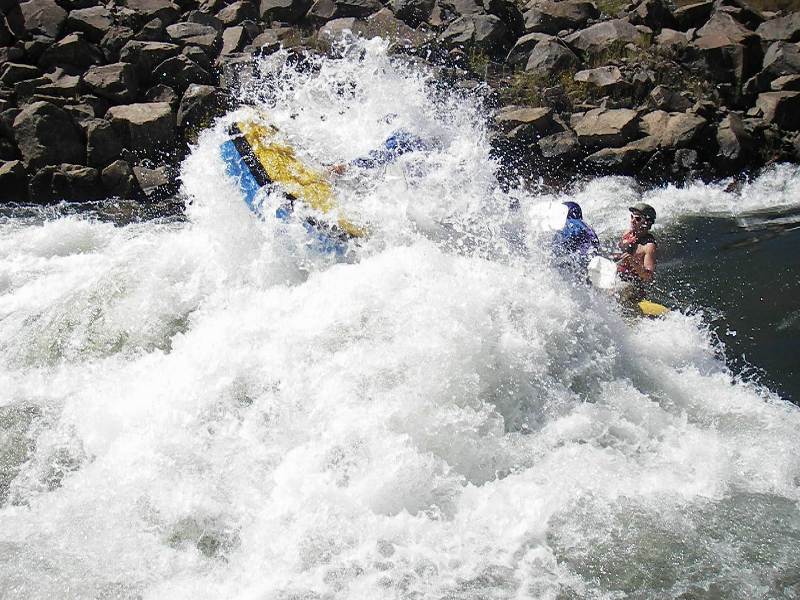