Colossal in height, the giraffe is the tallest land animal in the world, growing up to 6m tall. Giraffes also have the longest necks (of living species); even though the giraffe's neck is longer than most humans are tall, it is still made of only 7 neck (cervical) vertebrae (like all mammals). The giraffe's vertebrae are elongated and seperated by flexible joints. An adult giraffe weighs up to 1400kg. They have large brown spots on a yellowish background (the pattern of each giraffe is unique) The face is long (about 2 feet) and narrow, with at least 2 (up to 4) horns (made of solid bone and covered with skin) on the head. Giraffes have a short dense mane of brown hair, and their long tails end with a tuft of long, dark hair. 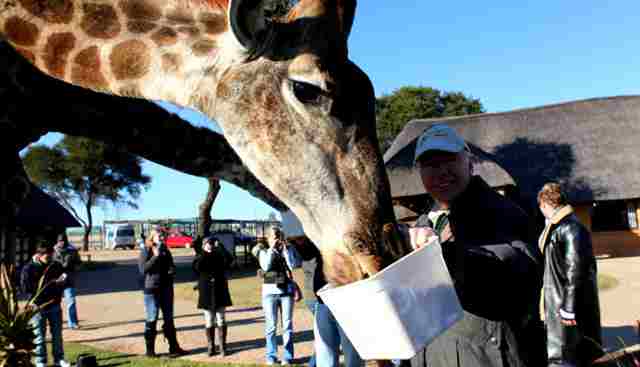 Giraffes have large eyes and outstanding vision, but an unexceptional sense of smell (compared to other mammals).

An adult male giraffe is known as a bull. Female giraffes are known as cows. Bulls have a pecking order, if a strange bull enters an area, it will be challenged by the dominant male. Dominance is established by neck wrestling using their horns to spar, and butting heads (they have particularly strong skulls) until one of them retreats.
Bulls are usually taller (up to 1 meter) than cows, and have larger horns. Bulls' skulls continue to deposit layers of new bone throughout their lives (which makes their heads become progressively heavier). Male giraffes develop bony lumps in their heads which look like extra horns (linked to fighting). You can tell a male from a female by the way they feed. Females bend their heads down over their food, while males stretch up to reach the newest shoots.

Individual giraffes mate haphazardly with others within their home ranges (overlap promiscuity).

While males & females interact during courtship & mating, there is no prolonged relationship between mates. Male-female associations for mating usually last only 2-3 days.
Twins are rare, with the number of offspring almost always being one.

A baby giraffe is about six feet tall. A female giraffe looks after her calf until it is about 13-16 months old. Males do not defend or care for their young. Although the mother may leave her calf for hours at a time over distances of up to one kilometre (while she browses elsewhere), they infant is usually left in a group with other calves (rather than alone), and the mother returns regularly to nurse & check on the infant. 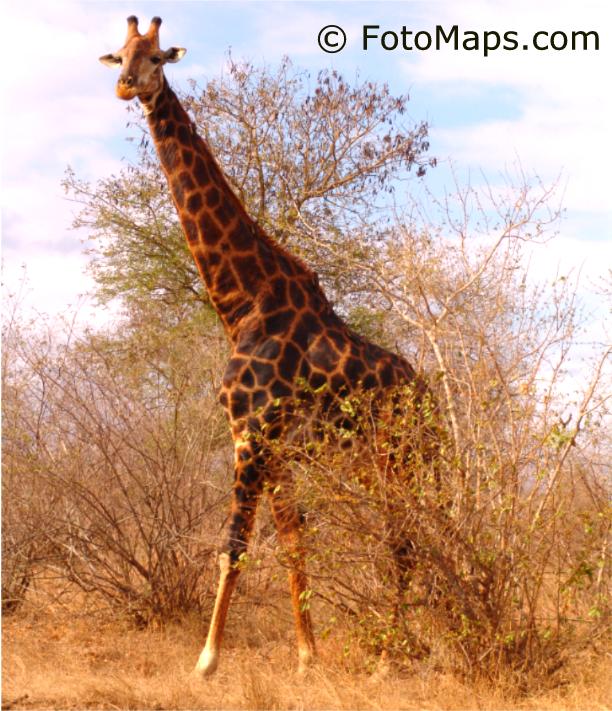 where do they roam?

Giraffes roam on the African savannahs.

In line with its gentle nature, giraffes are vegeterians. Giraffes eat up to 35 kilograms of food a day (it takes a lot of food to fuel such a big animal). Their height allows them to browse on leaves well out of the reach of other herbivores. Giraffes can nibble grass, but prefer eating leaves, twigs & bark from the tops of the thorny acacia tree (their long - up to 45cm - bluish-blackish tongue is able to wrap around even the thorniest twigs to remove nutritious foliage). The lips & tongue of a giraffe are covered by hard growths called papillae (an useful adaption if you feed on trees with forocious thorns). Because they only get a few leaves in each bite, giraffes spend most of their day eating. Giraffes do not drink often. In order to drink, giraffes spread their front legs so their heads can reach the water.

Giraffes are ruminants. Giraffes have the same type of stomach as cows, with 4 chambers (& chews its food many times). 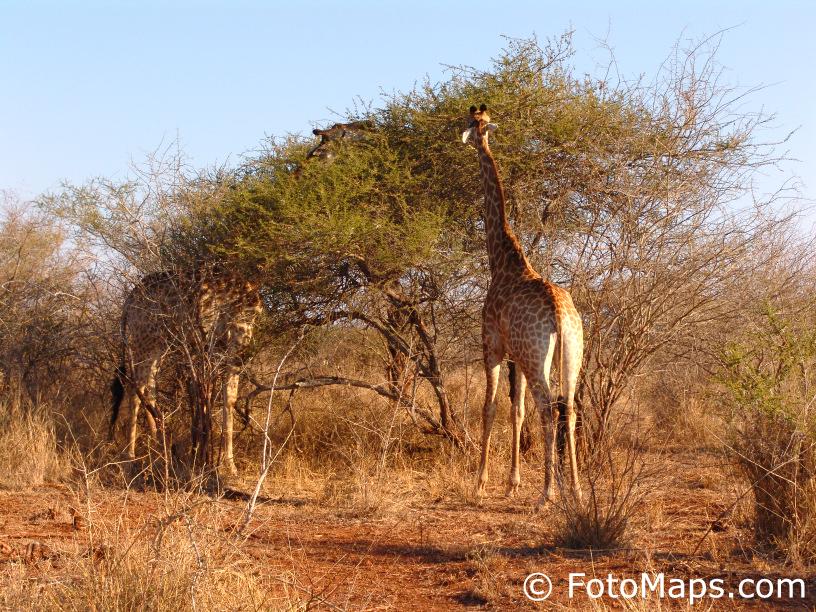 Because they are so big, giraffes don't really need to hide from predators; and have an inoffensive nature. They are hunted only by crocodiles & lions (besides humans). A lion has the capability of taking a full-grown adult down, and some prides prefer giraffes as prey. Giraffes are especially vulnerable when drinking. Their height provides them with outstanding visibility - antelope & zebra frequently hang with them for their ability to detect predators. A giraffe has large hooves (the size of dinner plates) which are used as weapons, usually in the defence of their infants (a hard kick from a giraffe can kill a lion!). 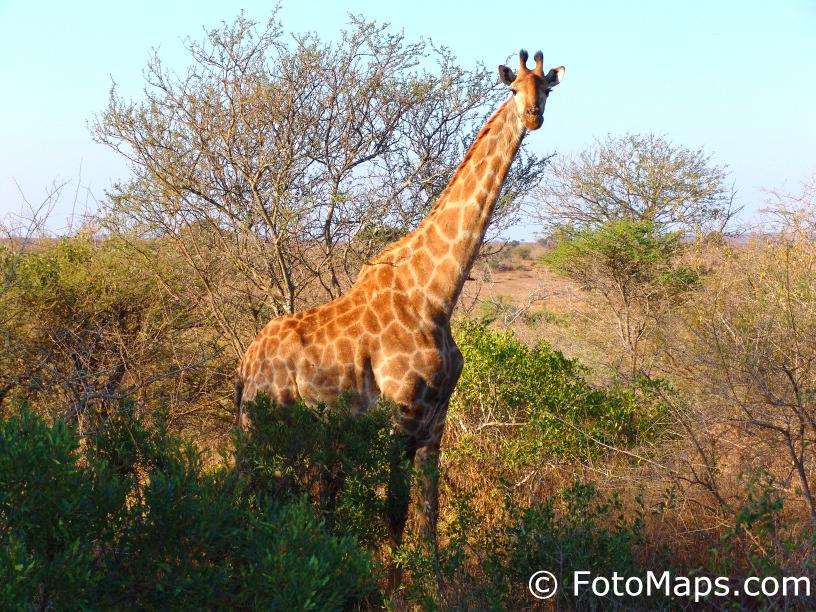 Giraffes have a distinctive walking style - they move both legs on the same side forward at the same time. When giraffes run, they move their forefeet together, then their hind feet, swinging the hind feet up and planting them in front of the forefeet. While running, a giraffe's neck swings backwards and forwards in order for it to keep its balance. A giraffe can outrun a horse, gallop at speeds up to 55km/h (the name giraffe comes from the Arabic word 'zarafah' meaning 'the one who walks swiftly').
However giraffes cannot walk over swampy ground (their hooves sink) and it is rare for them to wade through rivers.

Like most hoofed animals (ungulates), the giraffe sleeps standing up. Giraffes only sleep about 3 to 4 hours a day.

Females live apart from males. The males often congregate in bachelor herds (though they may be solitary).

Giraffe/Giraffa comes from the Arabic word "zarafah", which means "one who walks swiftly". The giraffe was originally thought to be a cross between a camel & a leopard, this mistake has been immortalised in the giraffe's scientific name, Giraffa camelopardalis!

The only other surviving giraffid is the okapi (Okapia johnstoni), a species found in the tropical forests of the Democratic Republic of Congo. The Okapi was only discovered around 1900.

The earliest fossil records of the modern giraffe, are found in Africa and Israel (dating back about 1.5 million years).