Get to know the south in South Africa. L'Aghulas (the southern-most town in Africa) is a 2 and a half hour drive from Cape Town past Bredasdorp and Struisbaai. Cape Agulhas is the southern-most point of the African landmass (the Cape of Good Hope is often incorrectly thought to be the southern-most point), and is where the warm Indian Ocean currents meet the cold Benguela current (which comes up from Anarctica). If you're in a hurry to get things done, this is the wrong place for you. Enjoy falling asleep to complete peace and quiet, except for the rumble of waves.

The L'Agulhas Caravan Park is on a bit of a slope. There are a few sites with a seaview, with the others looking onto houses. Lots of light pollution from floodlights. Phone 028 435 6015 to make a booking.

We stayed at the Agulhas Country Lodge in September 2010. There aren't TVs in the rooms, but we were delighted that they offered massages.

The Cape Agulhas Lighthouse, dating back to 1848 (the second oldest in South Africa), which is fashioned after the Pharos of Alexandria. The lighthouse contains a museum and a small rustic restaurant.

The remains of ancient fish traps made by the Khoi Khoi, who packed layers of rocks around the pools where to collect fish. 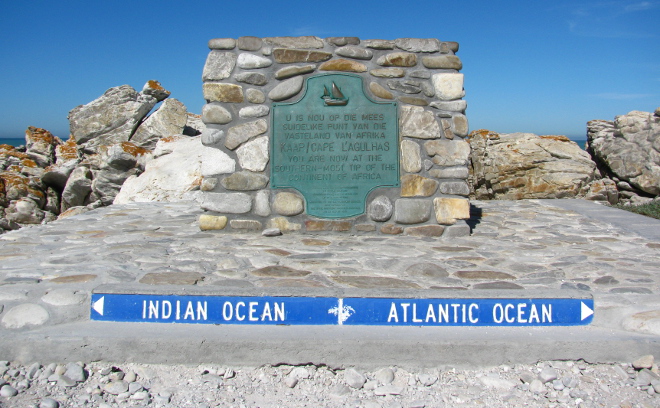