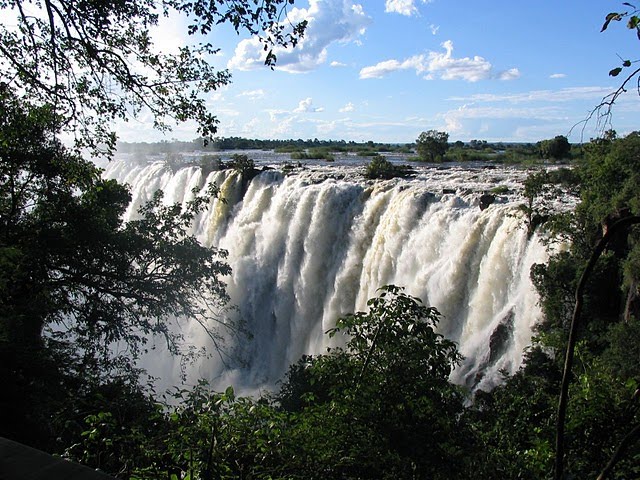 A say at the Zambezi Sun, footage of the viewing deck at sunset, supper at the hotel, helicopter ride over Victoria Falls, walk through the rain forest.

A directory/list of the official contact details of hotels in Victoria Falls, Zimbabwe.

Upstream of the falls there is:

Here's footage of an Aussie bungee jumper, whose cord broke when she jumped off the bridge at Victoria Falls - she swam to safety.

"The Falls" by Madeline

As soon as l heard the news before l even realised it my eyes were
filled with tears. l could not control myself for it was a dream come
true.

I had grown up hearing a lot of stories about Victoria Falls. I had
read about the mighty curtain of water that forms Victoria Falls in
newspapers and magazines. I had even seen??? its wonders on the
television. It was my dream that one day i should go on holiday to
this place locally known as Mosi-oa-Tunga or the Smoke that Thurnders.

It was in December of 2009 that my husband informed me that we were
going to Victoria Falls for Christmas holiday. I was so happy that i
could not sleep that night because of excitement.

It was on the 24th of December that we boarded a plane from Harare
International Airport to Victoria Falls around 19.00hrs. Within
forty-five minutes we arrived at Victorial Falls. We were booked in at the Holiday
Inn, a five star Hotel. We had a delicious supper that
night.

I was stunned by the beautiful views of the mighty falls that was
pinned on the walls. When i peeped through the window, I was
fascinated by the night view of the falls during the night.

The next day we visted the falls. I discovered the mighty works of the
Lord. Watching the falls was amazing. Our journey ended on the 1st of
January 2010. Those days were amazing and unforgottable.