Wow, there are so many Twitter rockstars in South Africa. Below is a list of who to follow to have a tweeting good time travelling in South Africa. It's a list of South African travel tweeters who actually follow, engage, reply & retweet (divided into categories of involvement in travel), as measured by our subjective experience of that interaction (no smart computer software). The order of categories doesn't matter. The list consists of everybody who was nominated during the nominations round a couple of months ago (plus some from a list made a few years ago). I'm sure that we have missed some great tweeters, but promise to include them in the update of this list - if you are one of the tweeters we missed, please accept our humble apologies, and contact us at @southafricaTO. Levels of participation naturally change over time, and we'll do this again in a few months time for a top 2018 list.

Here are the Dream Teams:

@Monique_PR_ - based in KZN, Monique ditched the corporate world and broke out into the world of social media & photography. A bedrock of the SA twitter scene (nominated by @travelopulent, @JustTours1 & @InAfricaNBeyond).

@StephanieMarthi - Black belt in photography, and into travel, beauty, adventure & small towns (see you at VAL, Stephanie,...only 18 permanent residents); uncanny knack of tapping into the subconscious and revealing the secrets of places explored (nominated by @travelopulent).

@tulipandphoenix - cityslicker who's a not so closet road tripper; and Jedi master of the camera. Recognises talent & #PaysItForward. All-round rockstar & All-in South African. Stick by this one people - she's going places. (nominated by @travelopulent, @meletsoblog & @InAfricaNBeyond).

@gotravelbug - go down the rabbit hole with Rose and she may take you places you would fear to go by yourself. Posts beautiful photos of her travels through South Africa. Willing to brave the cold to tell the tale (nominated by @travelopulent & @DiBrown5).

@travelopulent - our leader, who hosts #TravelChatSA - the best gathering on Twitter. She's your go-to person to figure out where to go & what to eat & wear. Recognises talent. (nominated by @thedeal_is & @MLTcarhiretour).

@CPTtwins - Twins from Cape Town - they'll take you for a hike into the wild (nominated by @Monique_PR_). Just be sure that you're not scared of heights and know how to pose whilst leaping into the air; and you'll be fine.

@DiBrown5 - also known as "The Roaming Giraffe", this former cartographic ninja is based in Cape Town, and has transformed into a photographic martial artist of note (nominated by @Andre24Social, @CeecesTravel, @thejaxblog, @Verushka143 & @InAfricaNBeyond).

@AnjeRautenbach- Somebody once said "How vain it is to sit down to write when you have not stood up to live"...fortunately, Anje has lived large and boy can she write - she has cycled much of the world but her soul is in South Africa - let go and let her take you on a trip. Knows how to tickle your funny bone (nominated by @DiBrown5, @Verushka143 & @thejaxblog).

@traveltonia - Travel blogger, writer & vegan...basically an all round good ouk who sees the larger meaning (nominated by @travelopulent).

@WeszMadz - is on a flight just about every week of the year, so has to be included here. When not working (or should I say, finding others work to do) he's camping - ask him for help in planning your roadtrip.

@Verushka143 - a Spicegoddess with a great sense of humour, Mistress of words, tourism lecturer & lover of books. Verushka hails from Durban. (nominated by @Monique_PR_, @CeecesTravel & @thedeal_is).

@DawnJorgensen - a long-time twitter travel tweeter, and an amazing writer - the best in fact. Dawn is passionate about photography, travelling and animal rights. She writes and photographs like a dream. She posts interesting tweets about her adventures sharing pictures with her followers (nominated by @Verushka143).

@2summers - yankie risking her life by living in Johannesburg, but fortunately knows how to box her way out of a situation. Distributor of sunshine. Was on Twitter before it became the kewl thing to do. (nominated by @meletsoblog, @Travelwrite1 & @moving_sushi).

@TazzDiscovers - Two Tazz's for the price of one - let Tami & Anton take you on a road trip through our beautiful country (nominated by @thedeal_is, @invisable_ct & @thedeal_is).

@TheSoloWandera - this crazy lady is hiking from Cape to Cairo through some of the most dangerous countries on this planet. Follow her whilst she's still alive (nominated by @Macoww, @Verushka143 & @GriffithsDaveA).

@HawthorneBlog  - a quick look today shows me caves, sunsets & views from misty mountains - this man is a professional mountain guide and it shows (nominated by MLTcarhiretour & @Monique_PR_).

@Travelwrite1 - In between commuting between Denmark, SA & the rest of the world; Caroline mixes up her travel writing with posts about contemporary events (nominated by @MLTcarhiretour).

@meletsoblog - perfect person to share a cup of tea with, and she'll take you where the chow is good (nominated by @tulipandphoenix).

@Kate_Els - Twitter stalwart & photographic Samurai - knows a good viewpoint when she sees it - stunning clickies of & reviews of her travels in southern Africa. A must follow! (nominated by @moving_sushi).

@campsbay_girl - has the best Twitter handle - into travel, exploring & youtubing (nominated by @GreatGrampops).

@MzansiGirl - lives by her name - a travel blogger who tweets about tourism in South Africa and how we can improve it. Part-time snapchatter, full-time rockstar (nominated by @meletsoblog).

@dheusdensza - twitter stalwart; covers a lot of ground in her travels so hold on tight & enjoy the feeling of your world being embiggened (nominated by @tulipandphoenix).

@ExpressionsSA  - doctorate in photography; 2 photographers for the price of 1 - (nominated by @thejaxblog)

@CapeTownCitizen - see the Mother City through the lens of this amazing photographer and father.

@CombrinkD - Always ready with a quip; follow him for a (more than) daily quote (nominated by @invisable_ct ).

@fit4thabo - travels a lot, dines a lot, and is sometimes found on Google/+

@scarletnguni - a romantic who loves to love & write. No longer a cynic! Hosts the famous #discoverOverberg on Wednesdays at 12h00.

@Foodandthefab - Cape Town based foodie, Ishay Govender-Ypma, who shares lots of photos with her posts.

@UrbanWalkerCT - A Capetonian based in Tableview who shares his walks around the city.

@capturingafrica - This twitter page specialises in African Safaris around Africa. He shares his travels adventures and pictures from places like Zanzibar and Mozambique to name a few.

@KnysnaSailing - to experience the motion of the ocean.

@Victor_TB - A top notch travel agent, particularly in the area of cruises - South African and Mediterranean.

@MSCcruisesSA  - the king of cruise - without them, there wouldn't be a cruise industry in South Africa. 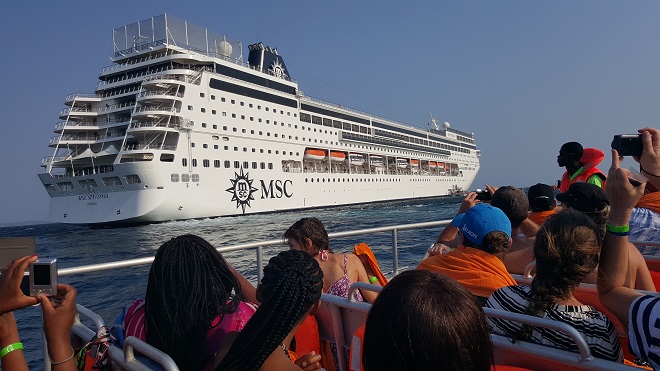 @ToursduCap - run by Francoise Armour, who has a wealth of knowledge about travel, particularly in the Western Cape, where she is based and runs her tours from.

@TWFTravel - Travel with Flair offer travelling tips like how to pack your luggage for a flight or tips to stay productive whilst travelling. They can help with personalising your leusire or corporate travel needs.

@Travelstart - An online agency ready to give followers quotes for flights, car hire and accommodation. They post specials for their followers and share inspirational travel articles for others to read.

@FlightSite - an online travel agency with a strong focus on package holidays, and shares plentiful travel news and photos from around the world.

@Derek_Hanekom - our previous Minister of Tourism, an avid travel tweeter!

@TIR_SA - the leading news source for the travel trade in SA.

@eTNW_SA - a news feed for the South African travel trade.

@MariusSoU - The person most likely to engage with you on Twitter. VERY active and engaging on Twitter, marketing the Western Cape (nominated by @Monique_PR_ & @InAfricaNBeyond)

@GoSocialSA - aka Jacqui MackwayWilson - a friendly WordNerd who chats about travel, nationbuilding and everything else from her base in the Western Cape (nominated by @Andre24Social).

@QueenBee_Mktg - knows how to create a buzz amongst the bees - she'll meet your social media needs. Focuses on hotels, guest houses & B&Bs (nominated by @invisable_ct ).

@craigjsa - petrol head who's into anything which involves a motor. Outdoorsman (nominated by @Andre24Social).

@Merentia  - stalwart of the SA twitter scene, and very active. Has her own hashtag - #merentiasadventures. Tweets about travel, South African experiences, events & adventures.

@Instacptguy - has an eye for a good photo and the skills to execute on it. His collection of Cape Town photos ranks with the best.

@capetrail - publishes the most awesome videos of hikes

@Salmoses - dreams of being a pilot

@kingjimZA- King Jim has a passion for travel & photography, and has recently put his tweeting feet on again :)

@CapeTown - a proudly independent tweeter about everything Cape Town

@hamishniven - Travels the world from Cape Town on photography gigs - what a life!

@hippie_ina_suit - friendly tweeter who is a bit of a hippy

@Route56 - accommodation and events along Route 56 from Middelburg to Pietermaritzburg.

@WurstExpress - when in Sedgefield be sure to pop in to get a CurryWurst from this uber-friendly spot.

@martinhatchuel - Martin Hatchuel runs "This Tourism Week", sharing his views about SA tourism from his base in Knysna.

@NTH_express - Nasrec Transport Hub plans to change the way people get around in Johannesburg South.

@MegtheGood - great sense of humour, knows the ins & outs of travel even though it's not her only focus - familiar with OR Tambo International Airport

@Jodenecoza - a legend of the South African twittersphere. Jo-dene is based in Jo-zi :)

@MyPE - this guy doesn't follow anybody, but boy does he engage if you mention Port Elizabeth.

@pilotsimon208 - British pilot who spent some time in Africa

@flycapetown - a provider of paragliding in Cape Town (tandem), mostly off Signal Hill & Lions Head, and shares fantastic footage of these flights.

@firstcarrental - You can request car hire quotes for most destinations in South Africa. They list polls on their twitter feed which followers can take part in.

@deoudehuize - runs De Oude Huize B&B in Harrismith, but takes an interest in all things Twitter in South Africa.

@W2SsouthAfrica - runs "Where 2 Stay-South Africa" from his pad in Port Alfred.

@TheHydeHotel - stationed in Sea Point, with stunning views of Signal Hill, including paragliders flying over The Hyde.

@HermanusWindsor - iconic Hermanus hotel, which is exceptionally well positioned next to the rocks.

@12_Apostles - the hotel located between Camps Bay and Llandudno

@Mr_Hotels - Thomas Walaza tweets about hotels from his base in Port Alfred.

@capeholidays - the king of holiday accommodation in Cape Town

@HotelMRP - one of the top 10 hotels in South Africa in the 2013 SouthAfrica.TO Travel Awards

@MillionThrills - all about Sun International - from Sun City to The Boardwalk.

@ortambo_int - Mention OR Tambo International Airport in a tweet, and they'll probably retweet it!

@lachicnomad - our contact with Mauritius, has lived through being detained in CPT airport - shame on you, Cape Town (nominated by @thejaxblog & @Verushka143).

@hildacronje - Retweeter of note, but no DMs allowed (nominated by @Andre24Social).

@gotravelyourway - run by Josh Cahill, who is from Germany, but based in Australia, and has travelled to more than 65 countries, including over 40,000km of hitchhiking.

@Campjay76 - CampJ is such a great retweeter that we found it impossible to leave her off this list!

@elizabethjoss - based in the Netherlands, Elizabeth tweets regularly about travel all over the world.

@wanderingiphone - Canadian based pro photographer, who founded The Heart of a Woman Project, which was piloted in Khayelitsha (a Cape Town township).

@flySAA_US - SAA flights from the United States. Shares South African travel related tweets, to showcase SA to the US.

@FlyRwandAir - RwandAir offers 1-stop flights from Johannesburg to numerous spots in the world, in particular in Africa.

@kulula - Their twitter page mostly serves as a way for followers to communicate with Kulula. You can ask questions and post a problem you are experiencing and Kulula will provide feedback.

@FlySafair - representing new airline FlySafair, which is owned by Safair. Shares a wealth of information about their startup plans.

@AirFranceZA - keep an eye out for their competitions to win free trips to France.