Hertz has car rental agencies across South Africa, including at all the major airports in Johannesburg, Cape Town and Durban. Hertz is also known as "The Hertz Corporation" or "Hertz rent a car", and is the world's second largest car rental company.

History of Hertz changes in ownership 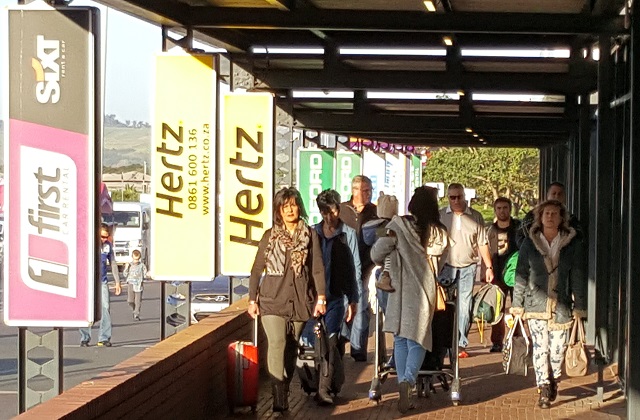 2013-07-20 Best Car Rental Chain : Hertz has been named the best car rental chain in the world, by readers of Frequent Business Traveller magazine!

2013-06-08 : Rating 5 /5 : Coming from Johannesburg you can imagine how important transport is. My family and I were traveling to Cape Town for 2 weeks and on arrival we needed a car in order to get around. Instead of the usual nonsense we get from car hiring services, South Africa.TO offered us the most affordable and convenient car hiring quotes. From the quotes we received we chose Hertz Car Rental services as they offered us the best price for the vehicle which we required. Hertz offer a very straightforward and reliable car rental service. The company has a much more welcoming, even family-feel about it. It lacks in any of the commercial, competitiveness that comes with big business but instead radiates something that is much more consumer friendly. On arrival, we headed to the Hertz airport kiosk and found their service to be swift,simple and very forthcoming. You feel you are being dealt with by a human being as a human being and not as a small entity being used in a money-making conglomerate like I have felt in the past with other car hiring services. The car was in immaculate condition, drove smoothly and gets a 10 out of 10 for comfort. I would highly recommend their stellar service next time you require a cheap rental vehicle. Silindile Masikane

2012-03-29 : Rating 4 /5 : We hired a car from Hertz Durban as they were the cheapest car rental we could find using the Durban car rental booking engine. We got a lovely Toyota Corolla with a Gauteng Province number plate - gives you right of way in KZN! On the uphills the car could do with a bit more power, but other than that we were very happy with the vehicle. All went smoothly picking the vehicle up, but dropping it off I wasn't sure whether to head for a group of cars or to park the vehicle. Rob

There are a variety of ways in which you can make your reservations for Hertz Car Rentals, but the most popular is via the website.