7 landmarks you see when landing at O.R. Tambo

This series of photos was taken on the 10th August 2008, as I came in to land at Johannesburg O.R. Tambo International Airport from the south (I was sitting on the port side of the plane). The pictures were photoshopped more than I would usually do, to allow the landmarks to stand out through Johannesburg's smog (click through the photo to the original and you'll see what I mean):

In the semi-circular streets in the next photo we can see Consol Glass (Wadeville, Germiston), with the N17 running from the bottom right of the photo diagonally upwards and to the right of Consol Glass. Consol Glass's Wadeville site was launched in 1946 and has 3 furnaces. 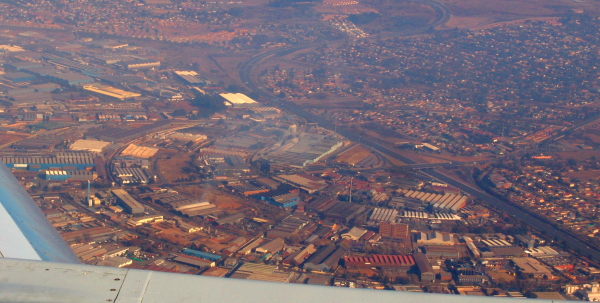 To the top-right in the next photo is Prospur Business Park and the Trade Centre (with the bright red roof on the right) in Boksburg.

In the bottom-right of the following photo you can see Kia Motors in Boksburg (and at the top you again can see the Trade Centre). 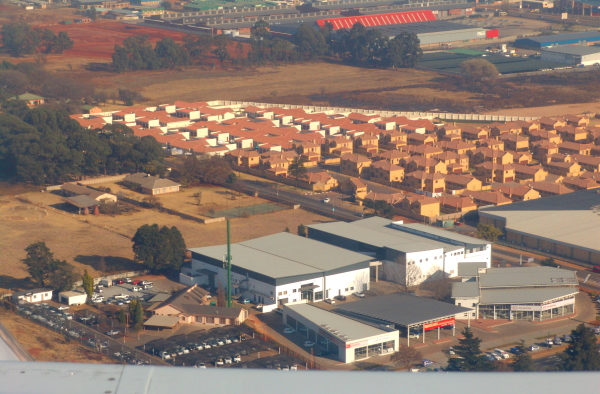 In the bottom half of the next photo we can see the roof of the East Rand Mall in Boksburg. Running from left to right is the R21 (also called Rietfontein Road at this point), and above it is Venter Square. 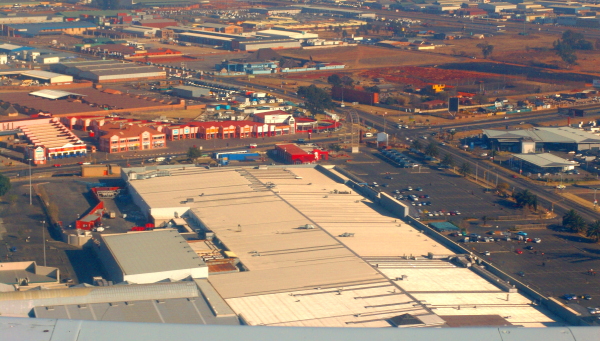 In the foreground of the next photo we can see the the East Rand Traders Mall (East Rand Flea Market) in Bardene, Boksburg. Running from the bottom upwards are Annabella Street on the left and Nolte Street from the bottom right of the photo (where you can find Liberty Trucks). Behind Liberty Trucks is the R21 - N12 interchange. In the middle of the photo is Game Warehouse and Comet Caravans. 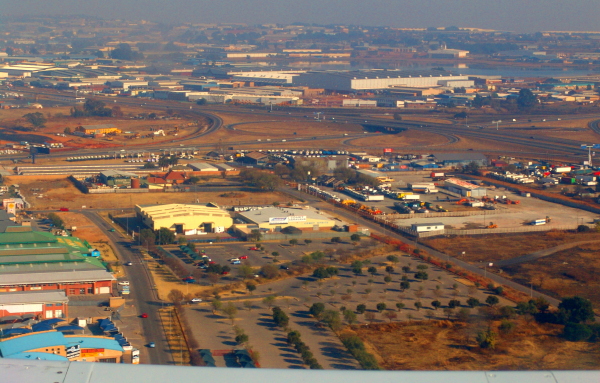 In the next photo we see the N12 National road as it goes under Rondebult Road. At this point the plane is almost directly over Wild Waters in Boksburg (a water park well known for occassionally being turned into an outdoor day party - H20, which is also where Vernon Koekemoer was discovered wondering about). In the next photo we can see the Fire Protection Association of Southern Africa's (FPASA) training college (the red bricked buildings). The FPASA was started in 1973 through funding from short-term insurers. All fire brigades in South Africa send statistics to FPASA on a regular basis, to allow the compilation of nation-wide statistics. South Africa is the only sub-saharan African country to have an internationally recognised fire protection association. This is the last photo taken before landing at Johannesburg's O.R. Tambo International Airport.