To book a cheap flight to Venice (Italy):

As the crow flies it is 8824km (5483 miles) from Cape Town International Airport (CPT) to Venice Marco Polo Airport (VCE).

As the crow flies it is 8532km (5302 miles) from King Shaka International Airport (DUR) to Venice Marco Polo Airport (VCE).

*The longer it is since the date of publication, the greater the chance that airfares have changed.

Things you may want to see in Venice include: 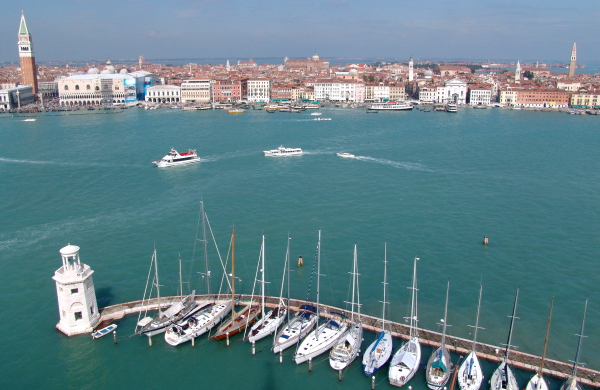 For the best weather visit Venice in May or June. In the middle of summer there's a bit of a smell coming from the canals, it's very hot and mosquitoes make their presence felt (literally!). Avoid going in October, November, December or January; unless you want to experience acqua alta (flooding).

"In the winter, Venice is like an abandoned theatre. The play is finished, but the echoes remain."

From late March to late October South Africa and Venice have the same time (UTC+2). In the rest of the year Venice is at UCT+1, an hour earlier than South Africa.

Navigate to the Venice Marco Polo Airport website to check whether flights are on schedule.

About a ten minute walk from the airport you'll find the boat jetty, from which you can take a water bus to Venice. This water bus is operated by a different company to that operating the water buses in Venice, so 2 tickets will need to be bought.

Hotels near the Airport

We recommend staying at Annia Park Hotel Venice Airport in Tessera, if you're looking for an overnight spot near the airport (of course nothing beats staying in Venice proper). Use their shuttle services to save money on transport (the road isn't great for walking).

Think carefully about whether you really want to hire a car from Venice Marco Polo Airport, as most transport in Venice itself is by water taxis. You can hire a vehicle from the airport from Europcar, Avis, Argus Rentals or Nova Car Hire.