Want to skip the drive along the wild coast, and fly from Durban from Port Elizabeth? Since Kulula stopped flying the route and Velvet Sky went bust, the choice is between British Airways and SA Express. Both BA and SAX offer in-flight meals.

We carried out a snapshot survey and British Airways were cheapest, but it does vary a lot between who is cheapest, so do use the flight bookings tool to compare the airlines.

The driving distance between Durban and Port Elizabeth is some 926km. You can drive from Durban to Port Elizabeth along the N2 National Road. It's some 910km taking you through Amanzimtoti, Port Shepstone, Kokstad, Mthatha, King Williams Town and Grahamstown.

Durban to Port Elizabeth by bus

If you don't want to fly or drive yourself, another option is to hop on a bus from Durban to Port Elizabeth. The time taken for the trip is on the right hand side:

Durban to PE by train

There is no direct rail service between Durban and Port Elizabeth (you'd have to travel via Johannesburg).

In South Africa's cruise season (from November to April), there are usually MSC Starlight cruises to Port Elizabeth from Durban and on to Cape Town. The opportunity is offered to get off and see Port Elizabeth, but not to end your voyage at this point (you have to carry on to Cape Town). 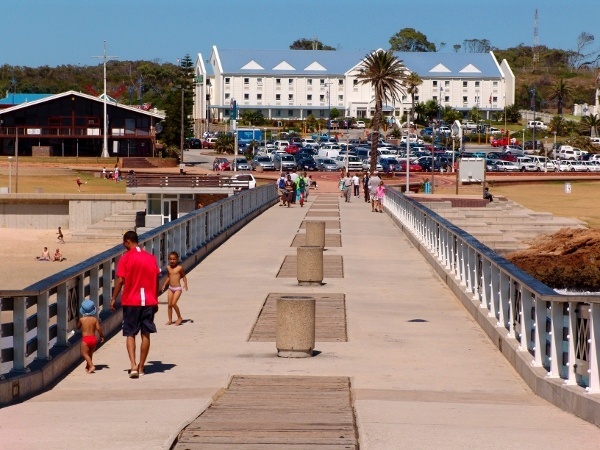 7 May 2009. This is what happens when you miss your flight: "Try… missing the only flight out of Durban to Port Elizabeth on the day of your expected departure! For once it was not due to procrastination or tardiness but basic human error on the part of Hubby – he read our car hire information and mistook it for our flight time! The look of absolute disbelief on his face, when we approached the flight desk and were told that the flight had already departed, I will never forget!
So there we stood, 2 huge bags, 1 camp cot, 1 set of golf clubs and no flight! Eldest was in tears and Wee One didn’t have a 18 month old clue!  While Hubby tried to book us on the next flight, the next day, I took the boys to the sweet shop as the situation called for chocolate even if it was only 8:30 in the morning.  Unfortunately, chocolate was not going to do it for Hubby who spent the rest of the day starring into the nothingness and shaking his head, reliving the moment over and over again.  You have to understand the man is a Virgo, perfectionist and financial accountant, missing a flight due to personal oversight and then still having to pay for the pleasure, shook him to his core!"

Popular hotels in Port Elizabeth are the Paxton & the Kings Apartment Hotels. Those watching their budgets may want to try the Bluewater Guesthouse, whilst if you think your wallet is putting on too much weight, then spend a few nights at the Lalibela Game Reserve.