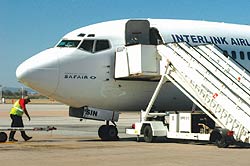 Although I haven't seen an official announcement from the airline, it seems that Interlink Airlines have been placed into provisional liquidation, with all its scheduled flights remaining grounded until a liquidator is appointed, who will then make a decision whether to continue trading and flying the airline or close it down, in consultation with officials from the Transport Department and the Civil Aviation Authority. It is understood a liquidator will be appointed early next month.

[No answers from Interlink when I tried to phone them this morning to confirm the facts in this article, but because of the importance of the information I have decided to distribute to our readers.]

The straw which broke the camel's back was probably the bird strike on the 28th December 2009, which resulted in Interlink suspending flights until the 25th January 2010. When Nationwide was grounded in late 2007 (albeit for different reasons), this also resulted in them going bankrupt. Airlines sometimes rent their aircraft (or go into debt to purchase aircraft), and they simply cannot keep up the payments if they don't have revenue coming in.

At this stage, all scheduled operations have been suspended.

What should Interlink passengers do?

Passengers are advised to wait for a formal announcement from Interlink Airline or liquidator, which is expected later in the week. In the interim, enquiries/refund requests can be directed to interlinkqueries@gmail.com.

What should the regulators do?

I think the regulators in South Africa should take the following steps to help prevent this mess from happening again (and by mess, I mean passengers who have paid for tickets not being able to get their money back when an airline goes bankrupt):

What should passengers do?

If you cant afford to lose the value of your ticket (plus a markup for what it would cost to get a new ticket), then always take travel insurance.