Mother nature is a spectacular builder. Victoria Falls in situated on the Zambezi River, and can be viewed from the Zambian or Zimbabwean side. The falls no place to go for a swim - they are the largest in the world, not in terms of height or width, but rather a combination of the two making it the largest curtain of water falling in the world (height is 108m and width is 1708m). The native people refer to Victoria Falls as "mosi-oa-tunya" (or "mosi-o-tunya") meaning "smoke that thunders."

9 Nov 2014 - Reinhard Kleindl from Austria has become the first person to walk across Victoria Falls on a slackline.

Getting to Victoria Falls

You can fly to Livingstone on the Zambian side, or to Victoria Falls on the Zimbabwean side.

Try steer clear of using the National Railways of Zimbabwe. If you have to, then make sure you ask for a first class compartment, but don't expect too much from it. The heading of James Murua's account of a train trip to Victoria Fall says it all: "National Railways of Zimbabwe make me love Kenya Railways". He found the fare reasonable for 2nd class, but....his carriage had no lights! "Then the biggest shock as far as I was concerned. No blankets and bed sheets". And don't expect much in the way of food either: "all you get was alcohol – Carling black label or Chibuku and a soft drink – coca cola. There were some snacky things – biscuits in a little pack, that sort of thing – that made me wish I had thought ahead and brought some food." On his return trip James tried out first class: "I suspect whoever had last used this place had smoked some very illegal substances and there was little issue with cleaning up".

When the Zambezi River is full the Victoria Falls becomes a monster, whilst the low season offers the opportunity for the brave & reckless to swim to the edge of the falls and sit in the Devil's Armchair.

From March the rains stop and the land slowly dries out. As the Zambezi quietens, above the falls elephant venture to the islands in the Zambezi to feast on the lush grass next to the river. In May the Zambezi's power grows weaker and fishermen, fisheagles and kingfishers return to fish from its waters. Many fishermen prefer fishing below the falls to avoid the dangerous hippos (& some at the edge of the falls).

From below the falls the Zambezi flows through Zimbabwe to Mozambique, where it forms a delta and drains into the Indian Ocean, north of Beira.

What's the difference between seeing Victoria Falls from Zambia or Zimbabwe? "The president, say people, only half-joking"! Traditionally, visitors have stayed on the Zimbabwean side in the town called "Victoria Falls", but since the turmoil in Zimbabwe under Robert Mugabe's rule, the Livingstone side has flourished.

Which side has the better view

Which side to stay on?

7 April 2013. Samora Mukombwe, a tour guide based at Victoria Falls who worked in the Zambezi National Park at Pioneers' Camp, is killed by a crocodile after his canoe capsizes and he falls in the Zambezi River. Henry Mudenda, a seventeen-year-old fisherman, witnessed the mauling and called other coworkers of Mukombwe at Pioneers' Camp, who found Mukombwe's body in the jaws of the crocodile about 200m from Pioneers' Camp. The crocodile was frightened away and Mukombwe's body recovered.

By bus to Victoria Falls

From 1 June 2013 Wild Horizons are opening a Canopy Tour of Victoria Falls, which will consist of a tour of the Zambezi's Batoka Gorge & the forest via rope bridges, slides & trails - suitable for all ages.

For a change it's a lady bungee jumping!

Mark completes a successful scream and bungee jump at Vic Falls (some footage of Victoria Falls Hotel in the distance).

Kiran makes it back alive from his bungee jump at Vic Falls (almost touching the water on the way down!).

Magnifique! Sanda from Norway pushes through his nervousness to do the bungee jump at Vic Falls.

Brendan goes for a bridge swing off Victoria Falls whilst holding a GoPro camera! "WhooHoo! Oh Yes. WhooHoo. That was fantastic, oh that was good, that might have been better than the bungee, oh that was fun. That was incredible."

Dacia Durham does the bridge swing at Victoria Falls - one can cut through the tension with a knife as we see her prepare and then jump through a light rain - footage from various angles (first part is a promo video, footage of Dacia starts at 1:18).

Norbert Figueroa's swing jump from the bridge at Victoria Falls (probably not what Livingstone had in mind!)

Most people go view the falls from the Zimbabwean side in the Victoria Falls National Park. You can buy raincoats, as if it's that time of year you will get wet! This video clip gives a good idea of what it's like viewing the falls from the cliffs, with the sound of rain coming down on occassion and a beautiful rainbow:

Step on top of one of these mighty beasts and go on safari, seeing the bush from high up - elephant safari at Victoria Falls.

Shearwater also offers elephant-back safaris at Victoria Falls: "An elephant-backed safari is an adventure you'll never forget. A chance for a unique safari on top of the bush's own 4x4. Interact with our herd of gentle giants and learn about them from the knowledge of our indonas."

Here's footage from a walk in the bush with Lion Encounters of a brutal killing of a monkey by a lion, it takes some 11 minutes, with the l ion toying with its prey. Not the way anybody would want to die.

Here's a photo by April Gilbert of her microlight flight over Victoria Falls: "I had heart palpitations as we were going up but quickly got used to it and was able to enjoy the amazing views of the cracks in the earth (visible at left in photo) that resulted in the falls along with the falls themselves. The current location is the eighth for these falls and they can predict where the next one will be in 20,000 years or so!  I also was able to see giraffe, elephant, hippo and crocodile in and around the Zambezi river from the air."

Photo sequence of a microlight flight over the Victoria Falls:

Victoria Falls is in a malaria prone area, so be sure to check with your doctor before you go and start prophylaxis before your arrival.

Top things to do at Victoria Falls

John Robson published this video of Victoria Falls in January 2013:

The Devil's Pool is a naturally formed infinity pool sitting right at the top of Victoria Falls. At the right time of year (usually from September to December) you can swim to Devil's Pool, after canoeing to Livingstone Island and seeing the spot David Livingstone himself stood (at other times of the year you'd be swept over the falls). Swimming at the top of the world's largest waterfall is quite an experience - it takes a combination of bravery, suicidal tendencies and recklesness! You can sit on the Devil's armchair, and avoid doing the "no-rope bungee jump". In fact, getting to the Devil's pool is just as dangerous as the pool itself, having to avoid stagnant pools which may have crocodiles in them, and cross channels with much stronger currents.

Cameron Mackie gets up close and personal with the Devil's Pool:

Living on the edge :)

Here are the latest crazies to upload footage of them visiting the Devil's Pool: 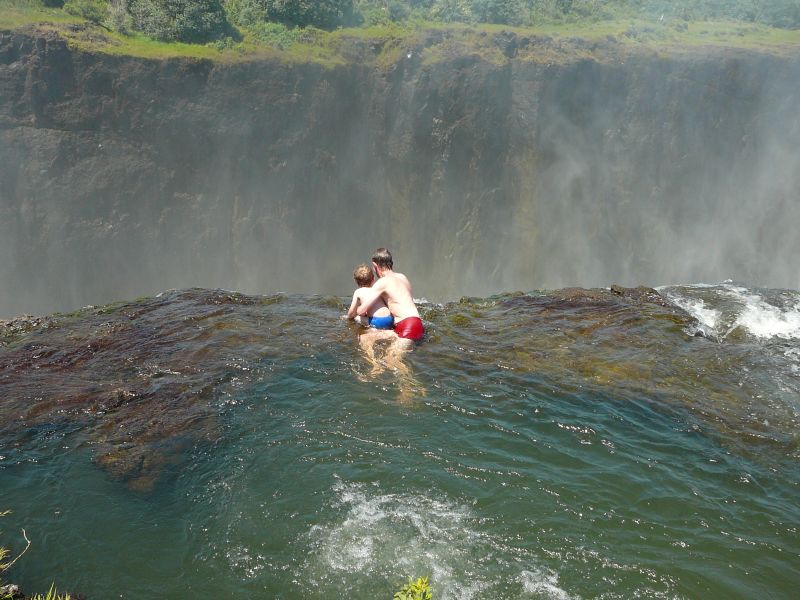 Here's footage which shows the difference in the falls between April and October:

Avoid going at Christmas/New Year when Victoria Falls and its hotels are at their busiest.

Time your visit for a full moon. Victoria Falls is one of a few places in the world where you can regularly see a moonbow. If you go during full moon you may see a rare lunary rainbow (moonbow). The spray from Victoria Falls creates a rainbow when the sun is out. At night, the rainbow usually vanishes, except when there is a full moon and a clear sky, and when the Zambesi river is at its most thunderous (January to July). It's best to view the moonbow from the Zimbabwean side (you need to look at the spray with the moon behind it). During full moon the Rainforest Park is opened for a several hours during the evening.

Victoria Falls is a rainbow paradise. The spray at Victoria Falls pretty much always creates rainbows, although when the water's lower it's not as spectacular. If you want the best view of the rainbow, try a microlight flight. During full moons, at night you can often seen moonbows. Try a bungie jump to see a rainbow from upside down.

Here's footage of the Victoria Falls at the end of the dry season (late September):

The currency in Zimbabwe is US dollars. Whilst South African Rand are generally acceptable, traders often don't have change and convert at an unfavourable exchange rate (often multiplying the dollar price by 10).

Steve Fisher's ultimate ride on the rapids below Victoria Falls.

Baboon troops live in the valley next to the falls, and are known for their snatch-and-grab tactics, if they see a plastic bag on you they may think it's got food in it and try to get it. Rather take a backpack around with you to carry things.

Merely be visiting Victoria Falls you make a huge difference in the lives of some very por people. If you want to do a bit more, here are a couple of charities you may want to consider:

This non-profit organisation mounts active patrols, finds employment for ex-poachers, carries out education for the local community, and assists in the rescue and rehabilitation of wildlife injured by humans. Contact: Charles Brightman at cat@yoafrica.com

Assists kids who have been orphaned, abandoned are living with a disability or HIV / Aids. The organisation is situated in the Chinotimba Township.

This programme words to help give the under-privileged children of Zambia an education, and support them throughout Zambia. Contact: Frkatete@streetkids-zambia.com