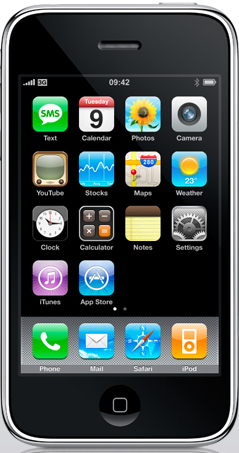 When Apple launched its iPhone on the 29th June 2007, there was much wailing and gnashing of teeth in South Africa, as Apple seemed to have forgotten that there was a market at the southern tip of Africa. Over a year later this wrong was finally righted, and in July 2008 the Apple iPhone arrived in South Africa.

In May 2008 Vodafone (who own 50% of Vodacom) announced that they had signed an agreement with Apple to supply the iphone in South Africa and various other countries (Australia, Czech Republic, Egypt, Greece, India, Italy, New Zealand, Portugal and Turkey). Vodacom are providing the iPhone in South Africa through the Vodafone agreement. The iPhone has an ipod in it, 3G wireless technology (using HSDPA technology), maps with GPS, web browsing (even while you're busy making a phone call) and html email. The iPhone 3G has technology which works from pretty much anywhere you'll want to be going on planet earth.

If you want to know more about the iphone go visit the Apple iphone South Africa webpage.