When you arrive in Sedgefield expect time and space to slow down, as you enjoy a quieter way of life. The town is on the garden route, some 5 hours drive from Cape Town along the N2 National Road.

Sedgefield doesn't have any hotels in the traditional sense, but there are a number of guest houses. Top spots to stay include the popular Shearwater On Sea and Pelican Lodge B&B.

If you're far away, then you'd fly to George, hire a car and drive the 38km to Sedgefield (about a 38 minute drive).

A Drive to Sedgefield for a holiday

On the morning of New Years Eve following a phone call from my father, I decided to drive to Sedgefield. I don't know what possessed me to go; it isn't often that I decide to spend a quiet weekend with my father and his wife and an expanse of nature. I just needed to get away. It was semi-overcast in Cape Town; coldish for December. It was no remarkable day. My little cat sat under the star-apple tree and gave me a piercing look as I told her I would be back in several days.

I took a slow drive up, watching the surroundings and the locals of each small town. Hitchhikers were scattered along the N1, waving R20 and R50 notes. The desolation was palpable as I stopped at a Shell garage outside Worcester to fill up and I contemplated turning around. I've never liked that stretch of road.

I drove through Robertson and then Ashton and passed by Swellendam to take the N2 turnoff and the scenery started to become more lively. After passing Mossel Bay I could feel the excitement in the air - 2011 was coming. The cars around me on the road were now packed with luggage and upbeat passengers and the buzz was contagious. The driving became very relaxing and as we all wound along the coastal passes I had a chance to reflect on 2010 and look forward to what 2011 had in store.

I arrived at their cottage on the banks of the Swartvlei in Sedgefield just before 14h00, and after lunch my father and I took a drive into town. We did some grocery shopping and then sat down for tea at a small coffee shop. The weather was still grey, but it was warmer than Cape Town. I can't remember when last I was so stress-free and content - something about Sedgefield makes it all right to forget about city living and all the responsibilities waiting back home. My dad spotted a sign nearby that announced that Sedgefield was one of seven slow towns. I thought it was rather self explanatory but he asked the waitress about it and she said that it had something to do with a slow festival that had been hosted in Sedgefield some months back. The big tortoise statue a few metres away from us suddenly assumed new significance.

The bird life picked up as evening fell. The three of us sat in silence around the fire looking at the vast wind-chopped lake and soaking in the peace. A few canoeists rowed past and my father chuckled as they tried to turn around and row back against the wind. I was in heaven. My dad's friend, a fork-tailed drongo, joined us for dinner on the veranda.

Night time was so dark that I decided there was no point in staying up; sounds of crickets and frogs and water and trees were lulling me to sleep in any case. I fell asleep long before the countdown, and enjoyed the deepest sleep I've had in weeks.

Keep an eye out for the Wurst Express trailer, from which you can sample their famous Currywurst. On weekdays they're on the main road next to Slow Town Liquors just off the N2. On Saturdays at the Sedgefield Island Market.

To get the best view of Sedgefield, try a tandem paragliding flight. 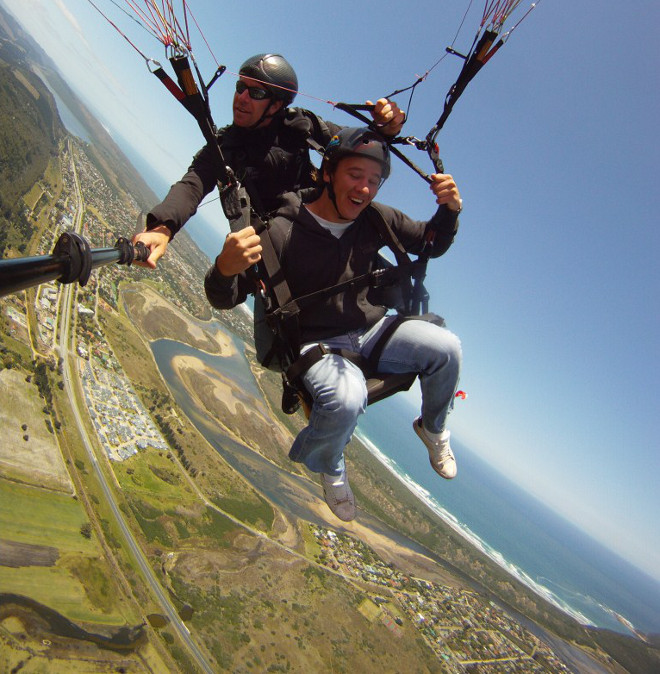