Simon's Town offers views over False Bay, beaches with warmer water than Camps Bay or Clifton, a Naval Museum and views of South Africa's premier Naval Base and of course the Boulders penguin colony. It is also close to Cape Point, and Simon's Town. 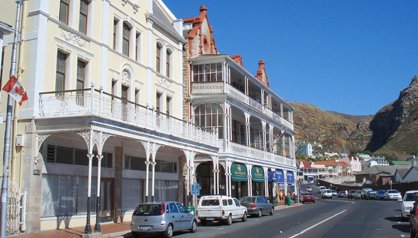 Here's a list of spots to stay in Simon's Town. If you would like your establishment listed, please mail cheapflights@southafrica.to.

We recommend eating at the Seaforth Restaurant. Pverlooking Seaforth Beach, the restaurant has great views of the ocean with Muizenberg Peak rising up in the background. Their calamari was an especial treat. A great way of visiting the restaurant is with a City Sightseeing bus, as the best tables are reserved for them.

The Boulders Penguin Colony is one of 2 mainland based penguin colonies in South Africa (historically, penguins chose islands to avoid predators) - the other is in Bettys Bay. As the name suggests, the beach is strewn with granite boulders, which makes an impressive backdrop for photos of the penguins. A boardwalk has been set up, so that the birds don't come into too much contact with humans; however the penguins also frequently venture and nest out of that area, and if you swim at the nearby beaches (Seaforth Beach, Waters Edge Beach or Windmill Beach) you could easily find yourself swimming with them. They look friendly but don't pet them, as they have a nasty bite.

"Noah's Ark" is the name of a large rectangular rock about 600m off the coast, and is home to an abundance of birdlife. To the left of Noah's Ark is Roman's Rock lighthouse (not in the photo).

Froggy Farm is on the southern end of Simons Town, before Murdock Valley.

Murdock Valley is on the southern end of Simons Town. Park on Africander Road to start a hiking route up Swartkop.

The most well known of Simons Town's beaches is Boulders Beach, described above, home to a colony of Jackass Penguins (African Penguins). The main swimming beaches are Seaforth Beach and Windmill Beach. Here's a photo of Seaforth Beach:

If you are looking for something quiet but central, try Waters Edge Beach.

A view of Simonstown Golf Course from a hiking trail on Swartkop. We can make out Noah's Ark in the sea, and Roman Rock lighthouse is a speck to the right of it.